Meet Yonder, the Unlimited Music Player that Comes Bundled With Your Smartphone 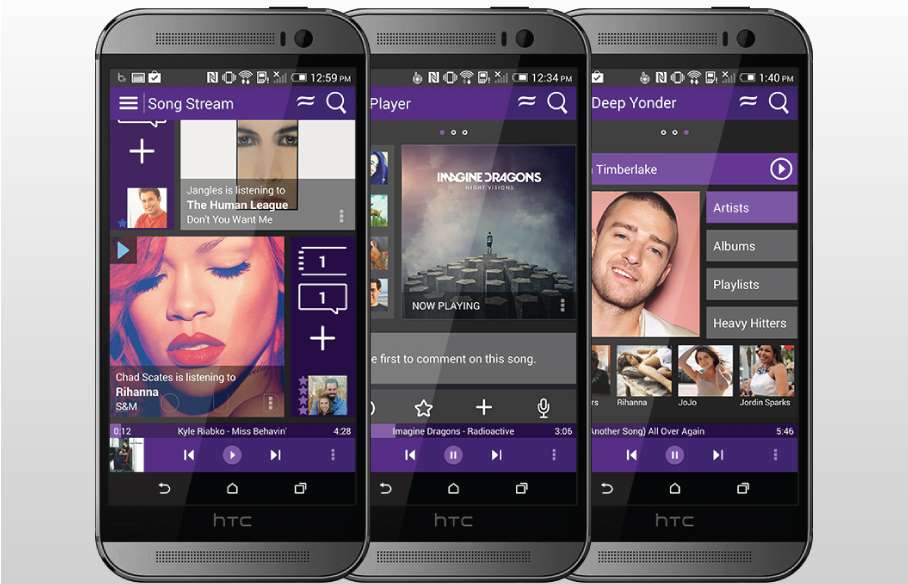 Most of us like music, and we use the internet in one capacity or another to listen to it. The way we obtain our music, though, varies greatly. Some of us make playlists on YouTube. Some download music through file sharing services. Others turn to streaming services like Spotify to get our groove on. As much as we like music, though, few of us actually pay for it. This is something Adam Kidron, chief executive of Yonder, is trying to change with his new music app that launched last week.

Yonder is both a music streaming and downloading service that allows users unlimited and immediate playback of their favorite songs along with algorithmically-generated music recommendations. Unlike other services like Spotify, Rdio and iTunes Radio, though, Yonder doesn’t charge users a monthly subscription fee for ad-free playback. Instead the cost of Yonder is “hard bundled” into the cost of the device being used to play music. This means users pay a one-time fee to access Yonder, and that fee is included in the price they pay for their smartphone.

Yonder isn’t the first music app to try the hard bundled business model, but it is one of the first, if not the first, attempt to tackle this business model that doesn’t come from a phone maker or carrier. Its methods and functionalities show very socially-minded goals on the part of its makers, goals that could attract hyper connected users but turn off other, low-key users. Here’s my review of Yonder’s current beta version.

After being demoed the app in person by Kidron, I was offered a download of the app by the kind marketing team at Yonder so I could test the app myself. Here’s a bit on my experience using the app on my HTC One.

After you log into the app using your email address or Facebook credentials, Yonder asks that you input three artists, songs or albums you like. I entered Fleet Foxes, Justin Timberlake and Diplo, though the app only seemed to offer pictures for JT.

After this quick onboarding process, the app immediately analyzed my musical preferences and started playing music from a playlist it thought I’d like. The first song it played for me was “Still Corners” by Fireflies. Not a song I’d say exactly meets my music preferences, but a song I could appreciate nonetheless.

The first screen I was brought to was the Song Stream, which allows you to see what the users you follow are up to and to explore music popular on Yonder right now. The song stream is kind of like the Twitter homepage, where you can view the recent activity of those you’re following along with trending topics. You can always access the Song Stream by clicking the curvy equals sign in the top right corner of the app.

The player controls are always visible at the bottom of the app screen. There, hitting the menu button offers you a number of options, including:

When Yonder plays in the background, an interactive tile within the Android notifications bar can be used to control playback.

Yonder’s Player screen contains a few pieces of information. Besides prominently displaying the album cover of the song currently playing, it shows three other users who’ve included the song in a playlist and allows you to comment on and favorite the song. Clicking on a user’s icon brings you to their profile, where you can follow them, see other playlists they’ve made, check out who they follow and see who follows them.

Besides letting you view the playlists of other users, Yonder also brings you music curated by experts who Yonder calls “authorities.” In this section you’ll find hand-picked lists from the likes of tour company Rock Junket, VH1’s Jim Shearer, Brian Slagel (a.k.a the man who broke Metallica), DJ Kazzanova of reggaeton fame and Billboard.

While other functions of the app seem to work fairly well, I can’t say as much for its search feature. When I searched for Diplo, for example, only songs by the Diplomats appeared. It wasn’t until I searched for Diplo’s label Mad Decent that I could find any of his songs. Perhaps this is a feature that will be perfected in future app builds.

Of all Yonder’s features, its ability to compile all the music you like in one place is what makes it stand out – so let’s get into that. As you stream music through Yonder, the songs playing are simultaneously being saved to your device’s cache. Rather than helping you stream music, Yonder is actually preparing your device to play music when you’re offline. Once I started streaming Mad Decent Volume 1, for example, Yonder immediately downloaded all of the songs onto my device. Next time I listen to these songs, they’ll play from my internal library rather than being streamed.

After streaming for a few minutes, you can tap the menu button in the app’s top-left corner to access your music collection, also called the Magic Library. There you’ll find all the songs you’ve listened to in the app, sorted by artist, album, title and genre. “You actually build a music library that’s bigger than the average iTunes library in less than three hours of playing with the application,” Kidron told me.

Within the Magic Library you can remove any song you don’t like so much, favorite the music you like best and otherwise gain a sense of your overall listening history. I guess this is all pretty magical, outside of the fact that the artists I entered upon login the app were not automatically added to my Library. In future updates I’d like to see the app automatically add artists you search for to the library. This would be more of an intuitive feature than would make the app that much better rather than a deal-breaker that would turn people off from using the app completely. I’m just saying, it would be nice.

Along with Yonder’s Magic Library comes its “always-on” mentality. Whenever you finish listening to a playlist, Yonder won’t sit idle, like Spotify might. Rather, it wants to continue helping you build your library. Taking cues from Rdio and Pandora, Yonder continues playing music it thinks you’ll like, with no interruptions.

A seen and be seen mentality pervades Yonder. In fact, this social quality is integral to the app. Unlike services like Rdio and Pandora, Yonder plays music from user-generated, rather than computer-generated, playlists. To determine which playlists you might like, Yonder analyzes your activities within the app – and who you follow carries the most weight. It’s only when no other user seems to match your preferences that Yonder will turn to computer-generated playlists. “We only go to those services like the Echo Nest as the very last resort if we can’t find a match. It’s our last, last resort,” Kidron told me.

He laughingly admitted that depending on user-generated playlists can lead to “screwy” results due to users’ eclectic tastes. This might explain why the app inexplicably started playing Houston’s “I Like That” in the middle of my session. While that song might have been my jam 10 years ago, it’s not exactly what I want to hear today. But that’s the price users will have to play for playlists that aren’t bland, according to Kidron. “There’s too much work going into making these perfect results,” Kidron said of the methods other services use to generate playlists. “But the problem is that perfect results create these very, very boring experiences, like Pandora.” If you listen to one song played on Pandora, you know absolutely what song is going to play next, Kidron pointed out. The music playback on Yonder, on the other hand, is designed to be much less predictable. “Some of the matches you might not like, but that’s life.” Kidron said. If you don’t like a song, simply remove it from your library. But during the process, Yonder will help you meet other people whose musical taste you respect.

Personally, when I use a music app, meeting new people is not my top priority. And this is why, for me, services like Yonder and Songza that are based on user-generated playlists and music lists curated by industry know-it-alls will never top services like Rdio, which use music recommendation services based on sounds and aggregated user behavior. On Rdio, I don’t have to look for users to subscribe to or spend time searching for or building playlists. Instead I merely tell Rdio what song or artist I feel I like listening to, and Rdio’s music recommendations engine will do the rest. Since Rdio relies heavily on the Echo Nest, its playback is much, much less predictable (and therefore more enjoyable) than that of Pandora. In fact since I started using Rdio I’ve discovered dozens of artists I would have never heard of otherwise. Unfortunately the Echo Nest was recently acquired by Spotify, a development that has pushed Rdio to turn to other music recommendation services – but that’s a whole other story.

Not every person who uses music apps is like me – some prefer to listen to a playlist curated by their favorite DJ rather than by a computer. Some prefer to form digital allegiances with people who like their music. For people like that, Yonder will work just fine.

How to Get Yonder

Yonder is currently running a commercial beta in the U.S. This means that the only way to use Yonder right now is to purchase certain unlocked HTC devices that are preloaded with Yonder. Through its own site and on Amazon, Yonder is selling Yonder-loaded HTC One M7 and M8 devices for $479 and $679, respectively, prices that are actually cheaper than those found for unlocked devices on HTC’s site.

In the future Yonder hopes to offer its service on more devices by more manufacturers. Though Kidron told me there will never be a desktop version of Yonder, the company plans to expand to iOS, Windows Phone and possibly Firefox OS if it takes off at the low end of the market.

What do you think: is a hard bundled music model feasible today?

What Does Your State Search for Most on Google? [MAP] »