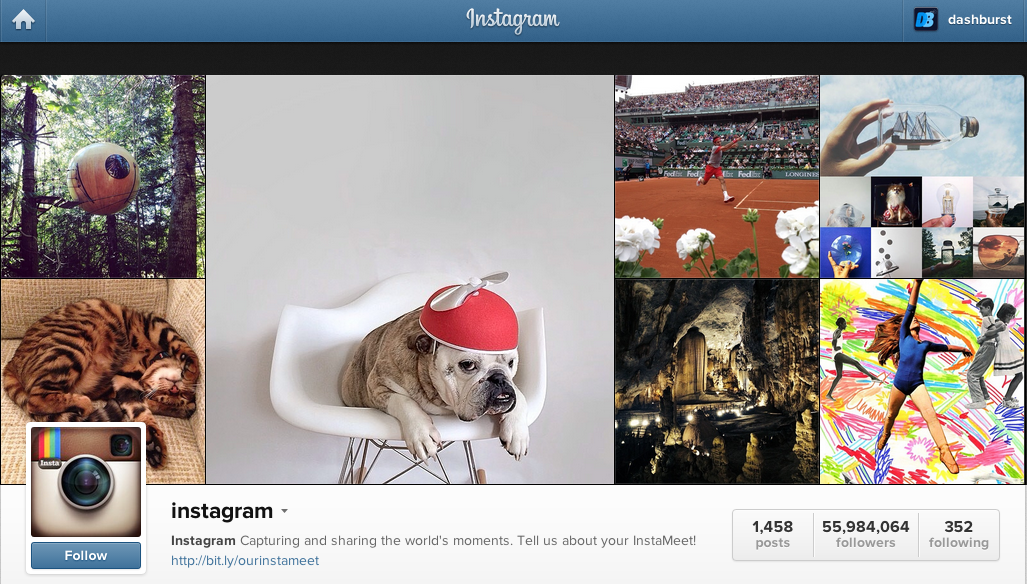 Since its birth in October 2010, Instagram has connected people through visual communication and social interaction by allowing users to share their photos and videos. While the app is great for friends and family to keep up with each other, many users also feel like they can be involved in the lives of celebrities through Instagram. So it comes as no surprise that when Websta released data on the most followed Instagram profiles, the top ten all belonged to celebrities. Here they are:

Instagram itself has 55,985,211 followers and 1,458 posts, making it the number one most followed Instagram page. The page features Instagram updates, contest submissions, interesting photos and randomly chosen user pictures.

Justin Bieber has posted 1,492 times to 16,694,803 followers, far behind the reigning champion’s number, but enough to earn him spot number two. Unsurprisingly, Bieber’s Instagram page almost exclusively features pictures and videos of himself.

Kim Kardashian takes third place with 14,959,803 followers and 1,657 posts. She posts mostly pictures of herself, her loved ones, and recently of her wedding to rapper Kanye West.

The fourth most followed profile belongs to Beyoncé who has 12,710,978 followers with just 640 posts. The award-winning singer/songwriter also posts pictures of herself, but adds some variety with images of quotes, song lyrics, and landscapes, as well as current and old family photos. Very rarely, you’ll find an image advertising her music and that of her husband, Jay-Z.

Filled with pictures of her concerts, photo shoots, dogs and more, Ariana Grande’s profile has character. The fun and charming air about her page has earned Grande 10,742,718 followers with 1,488 posts. In fact, Grande very recently surpassed Miley Cyrus, who’s now at number six.

Like Beyoncé, Miley Cyrus also has a wealth of followers despite posting fewer images than those in the top three spots. With 10,669,948 followers and 532 posts, Cyrus finds herself just barely missing the top five most followed profiles. It’s difficult to find words that accurately describe her posts, but there is one particularly fitting adjective: weird.

Kendall Jenner ranks number seven overall with 10,331,063 followers and 1,835 posts, even though she has uploaded more photos and videos than any of the previous profiles who earned higher spots in the top ten. Images on Jenner’s profile range from family and friends, to pets and toys, to photo shoots and fashion.

Like her half sister Kendall Jenner, Khloe Kardashian has posted more photos than those who rank higher, but with 9,601,256 followers, Khloe sits in eighth place. Her profile is filled with pictures of family and friends, as well as an abundance of quotes and inspiration.

Ranking at number nine is Taylor Swift with 9,313,811 followers and the least number of photos – just 213. Swift’s photos and videos are fun, happy and artsy. They show her spending time with friends and family, posing for photo shoots, performing at concerts, and generally enjoying life out and about. She also shows off her artwork and food.

Lastly, in tenth place, Kylie Jenner lags behind her sister, Kendall, and two of her half-sisters, Kim and Khloe, with 9,093,538 followers. Interestingly, Kylie has the most posts of all the top ten profiles: 2,383 total. Most of her profile consists of pictures of herself with friends and family, with the latest images showing off her current hairstyle of blue-dyed hair tips.

« Are You Looking for a Full-Time Writing and Editing Job?