Which World Cup Player Is More Popular on Twitter, Messi or Ronaldo? 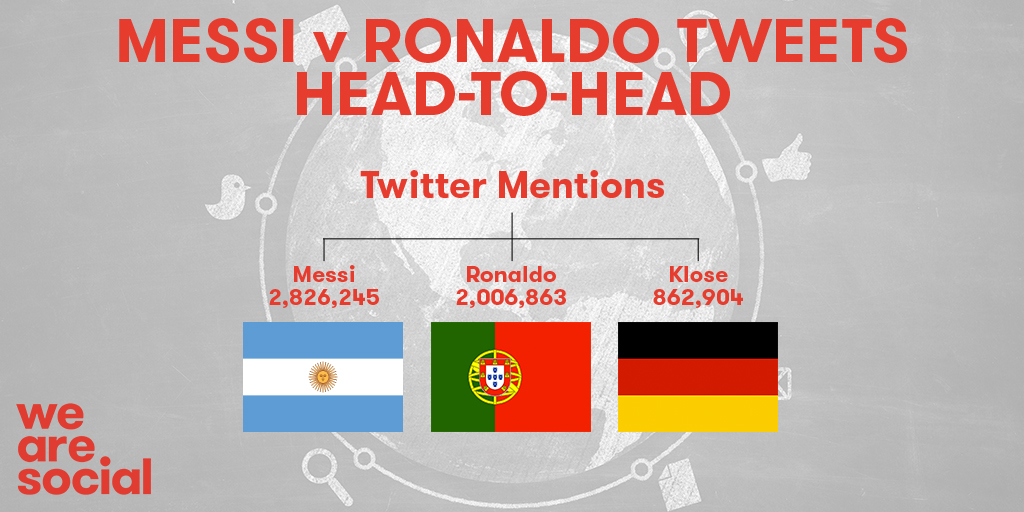 The World Cup is full of soccer stars, but two athletes have stood out more than the rest in social media chatter. Lionel Messi of Argentina and Cristiano Ronaldo of Portugal have made waves on sites like Twitter, but which of the two stars is more popular?

According to social media analytics group We Are Social, both performed well. But the final winner is Messi, who, at least judging by the numbers, is more popular on Twitter. Over the weekend, Messi accrued more than 2.8 million tweets about him, compared to Ronaldo who had just over 2 million.

Taking a closer look at the tweets, you can see that Messi is more talked about in conjunction with his achievements in soccer, while Ronaldo gets more mentions of his personality and looks. It’s worth noting, though, that this surge in Twitter discussion about Ronaldo’s appearance was partly due to speculation about the reasons behind the zigzag buzz in his hair.

Not to be forgotten, Miroslav Klose of Germany made an impressive run when he got more than 860,000 tweets in response to his record-breaking goal. Scoring for the fifteenth time in just four World Cup finals tournaments, Klose became Germany’s top World Cup scorer, and he tied Ronaldo Luís Nazário, commonly know as Ronaldo of Brazil, as top scorer in World Cup history. Granted, Klose’s Twitter photo with Rihanna played a part in boosting his tweets.

What players are winning the social media game?

« The Secret Life of Bees: Macro Photography Shows Off Beautiful and Strange World of Bees [PHOTOS]