Are Hard Bundled Songs the Next Big Thing in Music? 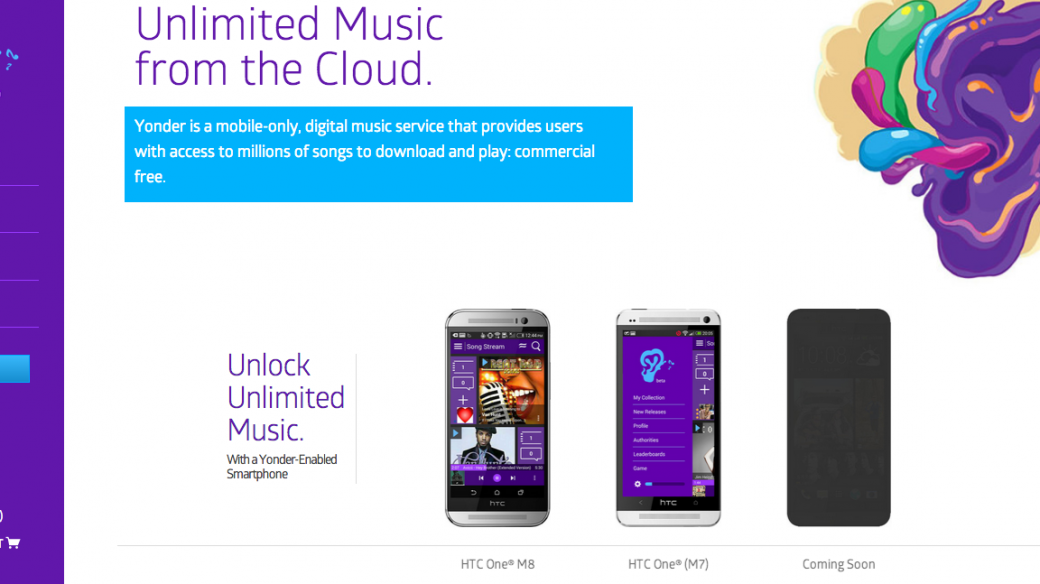 If the dawn of the internet has shown us anything, it’s that no one wants to pay for music. Despite the fact that 28 million people around the world paid for a music streaming subscription in 2013, free ad-supported listening through services like Spotify, Pandora and YouTube (not to mention the good old AM/FM radio) still reign when it comes how people consume music. If you worked in the music industry, you’d probably seek a more lucrative way to deliver your music.

This is what Adam Kidron, chief executive of the New York-based startup Yonder, is betting on. Yonder Music is an alternative to subscription-based services like Spotify and iTunes Radio. Rather than charging users monthly for unlimited music streaming, Yonder hard bundles the price of its unlimited downloads and streaming app into the price of the phone. This means users will pay a one-time fee for their music along with the phone they would have purchased anyway. Yonder will profit by pocketing a chunk of the cost of the music licenses.

Hard bundling has already been tested by various providers, including Nokia’s Comes With Music offering, Muve Music from Cricket Wireless and Milk Music by Samsung. Of these, only Milk Music remains active; Nokia has withdrawn Comes With Music in most countries while Muve is believed to be for sale since AT&T acquired Cricket’s parent company Leap Wireless.

Kidron has also previously tried to launch a hard bundled music service. In late 2011 his venture, Beyond Oblivion, went bankrupt before launch, putting $32 million, possibly more, of investment to waste. According to Evolver.fm, the failure of Beyond Oblivion was largely due to an impossible $150 million prepay deal with music labels as well as the company’s uncurbed spending on marketing, travel and other expenses.

With music streaming services on the rise, Kidron’s idea seems more feasible this time around. And Apple’s confirmed acquisition of Beats Electronics for $3 billion, which includes the recently launched streaming service Beats Music, seems likely to push other phone manufacturers and wireless carriers to look into offering music services of their own – making now the time for Yonder to pounce on new deals.

The music industry has changed drastically over the past decade. This is largely thanks to the iTunes Music Store, which made it easy and affordable for fans to purchase individual songs rather than entire albums. And music streaming services like Spotify and Pandora are already cutting into iTunes sales by encouraging users to pay one flat fee for unlimited music rather than pay to download per song or album. In fact it was the recent phenomnons of single song purchases and unlimited music streaming that made the initial album-only release of Beyoncé last December so surprising and successful; without the album’s songs available for individual download on iTunes, and without the album available for streaming, fans were forced to purchase Beyoncé as a whole or else not listen to it at all. The album sold 1.43 million copies in its first four weeks, with 617,000 of those sales coming in during the album’s first three days alone. Compare that to Beyoncé’s previous album, 4, which sold 310,000 copies in its first week.

In 2013, streaming subscriptions increased 51% to $1.1 billion in sales, while digital downloads decreased 2.1%. To put this in perspective, consumers spent a total of $15 billion on music during that time, according to the International Federation of the Phonographic Industry.

In Kidron’s eyes, these numbers are paltry. Despite the growing adoption rate of music streaming services, there is still a more profitable way for the music industry to distribute music to fans, Kidron says. Premium music streaming subscriptions only “appeal to a very small subset of a very small subset,” according to Kidron. That is, of all the people in the world who enjoy listening to music (which is, well, just about everyone), streaming subscriptions appeal only to a relatively meager number of people who want to pay for music. In turn, each subscription service appeals to a still more meager subset of that subset. Spotify, for example, recently announced that it has 10 million paying subscribers, and it’s believed that Beats Music has just 111,000 subscribers. These numbers are nothing to brag about, and in fact prove that music subscription services still have a long way to go. According to Kidron:

That’s less than 1% of the people who’ve got smart devices paying for music services. So what we’re saying is, we’re the service for the other 99%.

Targeting the vast majority who doesn’t currently pay for music is an aim that certainly sounds nice but ignores one of the hurdles Yonder couldn’t overcome in the first place: partnering with phone makers or service providers. This hurdle perhaps explains why Yonder is placing its bets on developing economies rather than on the U.S.

Though a beta version of Yonder is currently available in the U.S, Kidron says the company’s first official launch will be in Ghana, followed by Nigeria and South Africa. Over time, Kidron has his eye on entering the markets in the rest of Africa, Indonesia, India, Latin America and China. By the end of the year the company hopes to partner with a network provider or device manufacturer.

Moving Beyond Beyond Oblivion

Kidron’s entrepreneurial history isn’t spotless. Besides leading Beyond Oblivion, which Kidron still describes as “brilliant,” to bankruptcy in 2011, the British-born ex-music producer is also known for cofounding the hip hop website Urban Box Office Networks. The site went bankrupt in 2000.

Despite the embarrassment involved in failing publicly, Kidron is glad to have had the opportunity to fail, and he’s happy to apply the lessons of his past mistakes to a new venture. This time around, armed with a better idea of what needs to be built, Kidron and his team are determined to do much more with much much less:

We had a really clear idea. I didn’t really have it while I was at Beyond Oblivion, but the minute I was fired from Beyond Oblivion I suddenly had it. I knew that what we had done was, we’d taken a business model that was very brave, but we’d put it into a user experience which was quite conservative. So this time around, I wanted to do a user experience that was much more radical that was really based around the users.

Despite the fact that one New York Times reporter called Kidron “humbled,” Kidron feels lighthearted and, most of all, he doesn’t feel remorseful: “That’s the thing about Beyond Oblivion: I don’t regret it. If I hadn’t done Beyond Oblivion I wouldn’t be able to do this. It was an amazing experience,” he told me, citing the huge number of people he was able to meet through the project. “You get the ability to go and have your second chance.”

Seed money for Yonder, according to the New York Times, came from Cliff Burnstein of Q Prime, which works with stellar acts like Metallica and the Red Hot Chili Peppers. Yonder Music launched its commercial beta earlier this month on the HTC One M7 and M8 – read our review of the app.

What do you think: will hard-bundled music services be the next big thing?

« 7 Sunsets Captured at the Perfect Moment

Luxi for All: the Small Smartphone Attachment that Can Help You Take Perfect Pictures »