The “True-Man” Show: Meet the Manly Cast of the Perfect Reality TV Show 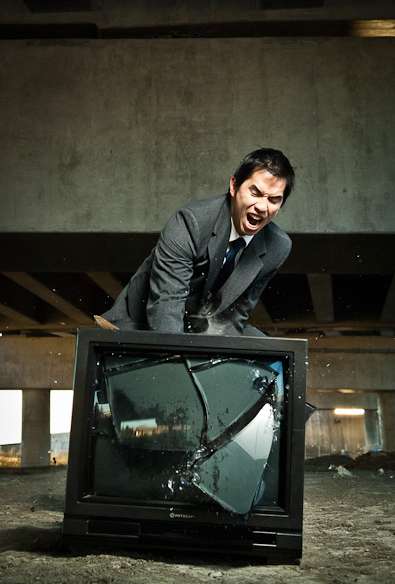 Today’s reality TV shows feature casts filled with angry housewives, bachelorettes in frilly formal dresses, and all sorts of other archetypes, stereotypes, and no-types that seem solely designed to appeal to women. Where’s the show for guys? Where’s the show filled with manly men doing masculine things in brutal, butch ways? The little problem of casting can easily be taken care of—some studio exec just needs to get these guys on board.

Every reality TV show needs its smack talker — someone who says things to your face instead of behind your back and always owns his opinions. In addition to being a tough guy from the streets of Detroit, Eminem is a gritty, street-wise poet who knows how to spit intelligent, on-point, socially relevant lyrics and rapier-sharp insults in the same sentence.

He’ll provide entertainment and protection, especially with his uncanny ability to sniff out BS and stand up for the underdog. Clearly, he should also come up with the theme song, which will then become an instant hit.

Even the most serious reality show needs some comic relief. However, instead of going for in-your-face try-hard comics, Bill Murray would make an excellent addition to any show. He’s as manly as they come, as proven by his turns in countless films such as Zombieland, Ghostbusters, Stripes, and Caddyshack.

He might goof off a little, but that’s part of his charm. Besides, the real Bill Murray is even better than any role he’s ever played. Don’t forget the urban legend in which he ate some guy’s fries at a fast food joint.

Every show also needs the smart, edgy guy, the guy who makes his motivations clear and always looks for the truth in any story. Remember, nothing’s tougher than intelligence. Shane Smith would definitely make the ideal smart guy on any reality show. He’d have great, real-world stories straight from VICE, and you’d never have to worry about him doing a double-cross on the rest of the cast because the man always sticks to his guns.

Will Smith for Action

What about the action hero? If there’s a new breed of tough, active men, then Will Smith heads the pack. Wouldn’t you love to see him back on the small screen? He’d bring a little comic relief, but ideally he’d be more Hancock than Fresh Prince. Smith is private but strong, calm in the face of tension or adversity. He’s a family man and a great friend, and he charms everyone he meets. With luck, though, he’d be able to talk Alfonso Ribeiro into making a cameo, because the world needs to see The Carlton Dance one more time.

The Walking Dead has clearly taken the world by storm, and it’s helped bring the genre of the Zombie Apocalypse to the forefront. A truly manly reality show needs someone who’s fully equipped to deal with raging zombies, rabid fans, or the occasional house fight. Enter Normal Reedus, who perfectly fits the bill. His turn as Daryl Dixon is perhaps his biggest credential, but don’t forget that he also kicked serious butt as Murphy MacManus in The Boondock Saints.

Although he can clearly put a hurting on somebody if necessary, Reedus is also extremely laid back. He’s cool, calm, and collected under pressure. He has impeccable taste in music and he’s genuinely fun to hang out with, all of which makes him an ideal roommate. Wouldn’t you want to hang out with him for an entire season?

Samuel L. Jackson is the coolest man in the world, yet he’s also humble. He takes no bull from anybody and he’s not afraid to tell you what he thinks — to your face, no less. Although he’s got attitude to spare and a wonderfully sharp tongue, you know he wouldn’t instigate a lot of fights among the reality show cast — but he might join Eminem in talking some smack if necessary.

Most importantly, he won’t let anyone get away with being false or inauthentic. Wouldn’t that be a refreshing thing to see on reality TV? Are you sick of no one ever getting held accountable for their actions? Well, Samuel would certainly step up to the plate.

He’s Gandalf. He’s Magneto. He’s a sir. Ian McKellen represents a different side of the manly spectrum, and it would really be a joy to see that on television. He’s brought two very beloved characters to the big screen and played them perfectly, and he carries that poise, sarcasm, and snarky appeal into his every day life as well. He’s a true gentleman, but he doesn’t put up with any petty nonsense. He’s also best friends with another truly awesome manly man.

Can you get any manlier than Jean-Luc Picard? You can, in fact, when the man responsible for the famous captain full of finesse is also renowned for playing Professor Xavier. There are worse things than imagining two X-Men alums on the same television show. Patrick Stewart is obviously awesome in his own right, but pair him with BFF Ian McKellen, and you’ve got TV gold. Just imagine the two of them together.

Better still, Patrick is also good under pressure and exudes a suave masculine vibe that you don’t see every day. You know he can easily kick your butt if the need arises, but he’s generally more interested in using his words — and he has a fantastic, snarky vocabulary at his disposal.

Manly men and tough guys come in all shapes and sizes, spreading through different archetypes and slamming stereotypes into oblivion. If you could pick the perfect cast for a reality show based on your favorite guys in the world — famous or from right down the street — which ones would you choose?

Let us hear your picks in the comments section below!

« The Most Delicious Way to Be a Nerd: Make a Layer Cake Modeled after Jupiter [TUTORIAL]

Now Attach Photos from Your Smartphone Straight into Gmail »