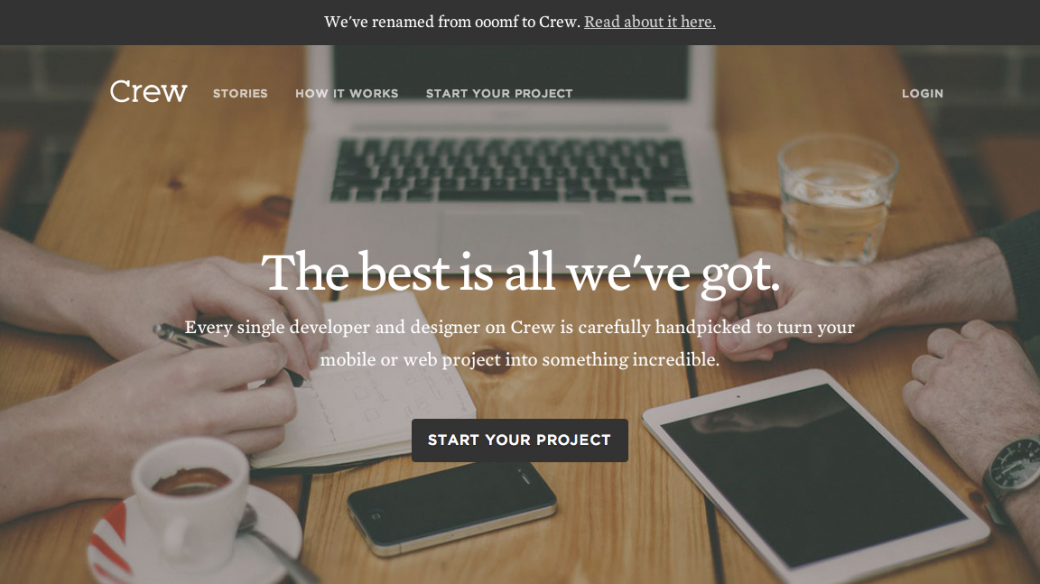 Freelancer marketplace Ooomf now goes by a new name. Initially built to help app developers reach bigger audiences, Ooomf was eventually relaunched under the same name as a marketplace for freelancers. Now, after announcing a $2 million funding round, the company has changed its name to “Crew.”

While the ooomf.com domain will remain active, visitors will be redirected to Crew’s new domain pickcrew.com.

Crew connects mobile and Web developers with freelance projects that fit their skill sets. In the past month alone, the company has connected almost half a million dollars in projects with developers who’ve done work for companies like Mailbox, Google, Path and Facebook, according to co-founder Mikael Cho.

The new name better reflects what the team is trying to accomplish. Plus, “Crew” is a lot easier to spell than “Ooomf,” as Cho noted in the Crew blog:

So why did we choose the name Crew? One of the main reasons we chose the name is we love what the word ‘crew’ represents (and that it’s easy to spell).

From the dictionary, ‘crew’ means, ‘a group of persons involved in a particular kind of work or working together.’

In essence, this is what our company is about – people working together toward the common goal of making something exceptional.

In the future, the Crew team plans to continue building Crew and moving the freelancer community forward.

The company raised $2.1 million in addition to previous funding through Fred Destin of Atlas Venture.

Have you scouted any new projects on Crew yet?