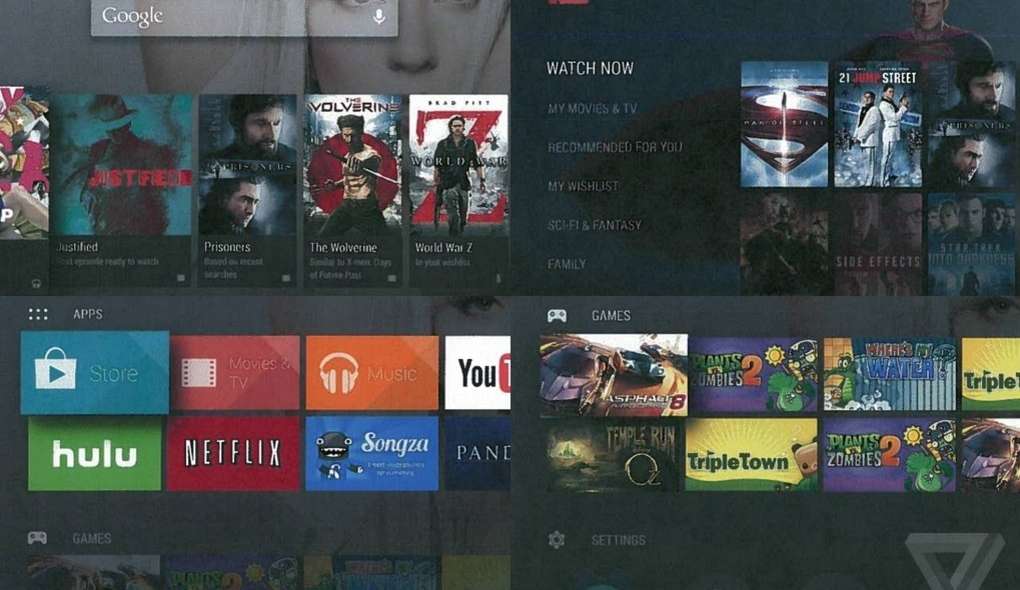 The world of set-top boxes and streaming televisions is expanding further still. Google is making its second attempt at conquering the living room with Android TV according to The Verge. The system is designed to put content, rather than apps, front and center.

According to leaked documents about the project obtained by The Verge, the set-top box interface will vastly differ from Google’s original, failed Google TV. Android TV will consist of scrolling cards that represents movies, shows, apps and games. These cards will live in shelves that can be scrolled through using a remote control with a four-way directional pad. The interface doesn’t sound too different from that of Netflix, which is famous (or infamous?) for presenting users with seemingly endless shelves and recommendations to scroll through. Similar to Amazon’s Fire TV, Android TV will reportedly also support voice input and offer an optional game controller.

What Android TV will do differently from other set-top interfaces, however, is emphasize content, not apps. While apps will certainly be available for the system, Android TV’s homescreen will offer content suggestions as soon as users turn on their TVs. This means that instead of starting your TV session by clicking into Hulu, for example, you might directly be presented with content you can stream from Hulu instead. Through this setup, Google aims for there to never be more than three clicks between you and the content you want to enjoy.

It’s not yet clear what relationship, if any, will exist between Android TV and Google’s existing streaming TV dongle, Chromecast. It’s possible, though, that both might exist as their own separate ecosystems, and that developers will have to create separate apps for each device.

It’s also unclear how Android TV fits in with Google’s current manufacturing partners, like Samsung, which is currently on its own path into people’s living rooms by building its software directly into televisions. I’m curious to see how Android TV could compete price-wise with Fire TV and Roku, or content wise with Fire TV, which seems to be building up a healthy number of partnerships with streaming services. If Android TV offers the same features and the same content at the same price as Fire TV, for example, what will convince people to spring for the set-top box? I’ll be waiting for Google to release its secret weapon when Android TV actually launches.

« What if the Internet Were a Role-Playing Game?