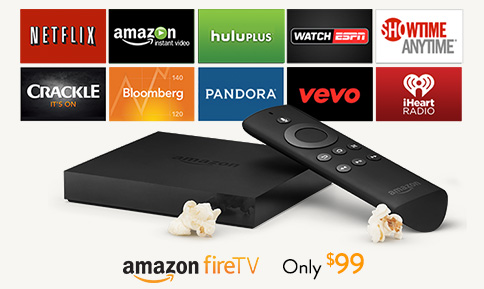 Rumors have been circulating for some time now that Amazon would launch a TV box to compete with Apple TV and Roku. Today the online retailer finally debuted the elusive setup in a New York press conference. Dubbed the Amazon Fire TV, the tiny box plugs into your TV to let you watch content from many providers including Netflix, Hulu Plus, WatchESPN, SHOWTIME and, of course, Amazon’s Prime Instant Video.

The Fire TV aims to be fast, simple to use and, most importantly, open. Unlike similar systems like Apple TV, the Fire TV will allow you to stream movies, shows and music from all of your favorite subscription services.

Besides its small form factor and fast performance (which I’ll go into later), the Fire TV comes with a feature unlike anything available in its competitors: ASAP (Advanced Streaming and Prediction). Fire TV uses your Watchlist, recommendations and viewing habits to predict which movies and TV episodes you’ll want to watch next and then pre-buffers them. This way videos play as soon as you press start and you don’t have to wait through buffering.

Sure, other services like Apple TV and Roku load video fast enough, but they still make you wait a moment while they buffer your content.

In a letter to Amazon customers available on the Amazon homepage, Amazon founder and CEO Jeff Bezos pointed out the cumbersomeness of current TV search. Often handled by clicking one letter at a time from a remote control, searching for just one title can often take minutes using current TV systems. To make search less of a burden, Fire TV comes with voice search built in. Just speak your search into your remote control and your TV will respond.

The list of streaming services available on Fire TV to start isn’t too shabby, with Netflix, Prime Instant Video, Hulu Plus, WatchESPN, VEVO, SHOWTIME, Crackle and YouTube all included out of the box and additional services like WWE Network, MLB.TV, WATCH Disney Channel, WATCH ABC and Twitch coming soon. Of course, Fire TV users can also rent or purchase videos from Amazon Instant Video‘s collection of over 200,000 movies and TV episodes.

One of the interesting things about offering so many streaming services is that along with them Amazon will display a price comparison tool. Just like when you shop for physical goods on Amazon.com and Amazon lets you sort products by price, Fire TV will similarly help you find the lowest price for streaming and purchasing the content you want to watch. Initially the tool will only be available for Hulu Plus, Amazon Instant Video and Prime Instant Video, though Amazon says the tool will expand to other content providers in the future.

Besides letting you compare prices, Fire TV also lets you “fling” TV shows and movies to your smartphone or tablet using Second Screen. This means you can take videos you started watching on your mobile device and finish watching them on your television screen. When you fling videos to your TV, your mobile device can display information from Fire TV’s X-Ray feature. X-Ray, powered by IMDB, displays information about a movie’s or TV show’s cast and crew, the video’s soundtrack, trivia items in context with the action on the screen and character backstories. Initially Second Screen and X-Ray will only be available on the Kindle Fire, though iPhone and iPad access should come later this year.

Initially Fire TV is partnering with Pandora, iHeartRadio, TuneIn and VEVO for music and music video streaming. Music stored in Amazon Cloud Player will also be available for streaming starting next month. And, just like X-Ray for video, X-Ray for music will display pertinent information while media is playing, including song lyrics, starting next month.

Amazon has partnered with game developers EA, Disney, Gameloft, Ubisoft, Telltale, Mojang, 2K and Sega to offer games Minecraft, Monsters University, The Game of Life, The Walking Dead, NBA2K14, Asphalt 8, Riptide GP2, Despicable Me: Minion Rush and more to customers right out of the box. The average price of paid games available for Fire TV is $1.85.

To play games using Fire TV, users can use the Fire TV remote control, Fire TV’s proprietary game controller (which retails for about $40) or using the Fire TV app, which will be released next month.

Of course, what kind of streaming TV competitor would Fire TV be without parental controls? Amazon’s version, called FreeTime, lets parents create profiles for each of their children. Using these profiles parents can select the content each child can see, how long they can watch each type of content and at what time of day they can watch it. For parents who already use Kindle Fire, FreeTime settings sync with profiles made on the Kindle.

Fire TV is small (just 0.7-inches thick), but it packs a lot of punch. The devices comes with a quad-core processor, a dedicated GPU, 2 GB of memory and dual-band, dual-antenna Wi-Fi. Amazon claims the Fire TV has over three times the processing power of Apple TV, Chromecast or Roku. The device supports up to 1080p HD video and up to 7.1 Dolby Digital Plus surround sound. Plus, the Fire TV’s dedicated Adreno 320 graphics engine that processes 57 billion floating point instructions per second.

It’s also important to note that Fire TV is controlled by a proprietary remote control. Unlike other remotes that require a line of sight to send signals to the TV box, Fire TV’s remote sends signals over Bluetooth.

Fire TV is retailing for $99 and is available for order starting today at amazon.com/FireTV.

Which TV streaming setup do you use?

« Apple Is Most Improved in Green Internet Efforts, Amazon among the Worst [REPORT]

This Waitress Was Tipped $1,000 for Being a Good Person – Watch How She Reacts »