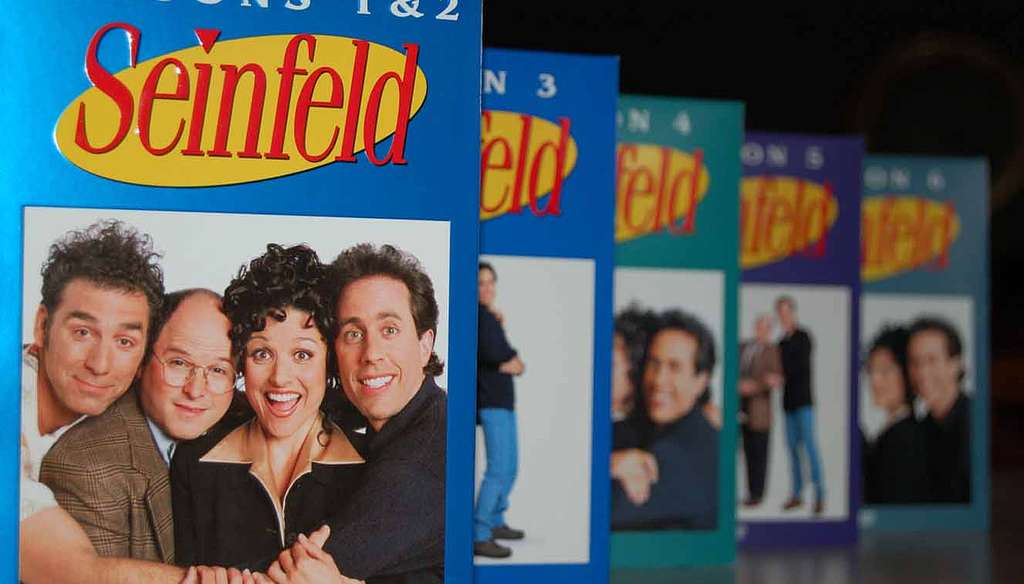 Happy Birthday Jerry Seinfeld, you’re 60 years old. How about celebrating this milestone with a walk back in time, through some of the top Seinfeld episodes? In honor of Jerry’s 60th, here are the top 10 Seinfeld episodes, according to TV.com user ratings. For the full Seinfeld experience, we’ve included accompanying video clips and TV.com’s episode summaries. A gift to us all for the TV sitcom star’s big birthday.

“Elaine is dating a jazz saxophonist who’s sponge-worthy but “he doesn’t really like to do everything.” Jerry tells one of the members of his band that the saxophonist and Elaine are “hot and heavy.” Kramer stocks up on supplies, including 50 cans of “Beef-A-Reeno.” Susan’s parents meet and have dinner with the Costanzas for the first time. Both families obsess over a loaf of rye bread that wasn’t served with the meal, which Frank takes back home. Elaine’s boyfriend writes a song about “their relationship,” which later has a big impact on his career. Kramer takes over a friend’s horse-drawn carriage for a week and helps George out with his scheme to replace the rye bread. Unfortunately, he feeds the horse a can of “Beef-A-Reeno” right before giving the Ross’s their ride. Jerry manages to get his hands on a loaf of marble rye.”

“The gang struggles to find gifts for a dinner party. Jerry and Elaine stop at a bakery to get a cake, but they forget to take a number and lose the chocolate pastry and the one they get has a hair on it. Kramer and George try to get the wine but must get change for a $100 dollar bill and wait for a double-parker to return to his car.”

“George thinks he’s made it big when, shortly after moving in with his parents, he gets work as a hand model. Elaine arranges for Jerry to appear on The Today Show to promote a charity benefit. However, when out to dinner with Kramer and his new “low talker” girlfriend, a misunderstanding has Jerry agreeing to wear a ridculous, pirate-style puffy shirt on TV.”

No thanks to Elaine, Jerry must work hard to prove he is straight when a college reporter mistakenly reports that he and George are gay, “not that there is anything wrong with that.” Things really get out of hand when the article is picked up by the New York Post. Jerry ends up dating the college reporter to clear his name, but all does not go well.

“The gang experience a series of misadventures while trying to find Kramer’s car in a mall parking garage.”

“Everyone makes a trip to the Hamptons to “see the baby” and enjoy the weekend. George’s girlfriend goes topless and everyone sees her chest before he does. “The baby” is the most hideous thing they’ve ever seen. Elaine is confused when a handsome doctor refers to her as “breathtaking” – the same term he later uses to describe the baby. Kramer finds a filled lobster trap. Jerry’s girlfriend sees George naked, after he’s just gotten out of the pool, so something isn’t as it should be.”

“George comes to the realization that he should try to do the opposite of everything, so he does, his luck changes and everything begins to go his way including getting a girlfriend, a job with the Yankees and moving out of his parents’ house. Things begin to be unlucky for Elaine after she buys a box of “Jujyfruits.” Kramer appears on Regis & Kathie Lee to promote his coffee table book. Rachel wants to break up with Jerry and he readily agrees, because his luck has been “even Steven.” Elaine’s eating of “Jujyfruits” causes Pendant Publishing to go under, and later she realizes that she and George have traded places.”

“Jerry’s girlfriend, Naomi has a laugh that sounds like “Elmer Fudd sitting on a juicer,” and when she hears George’s message to Jerry, she breaks up with him. So instead, Jerry asks Elaine to accompany him on a trip to a cabin in the mountain with George and Susan. Kramer isn’t invited. Jerry agrees to a side trip to visit a sick fan, a “Bubble Boy.” George gets into a fight with the “Bubble Boy” over the correct answer to a Trivial Pursuit question. Kramer and Naomi also make the trip to the cabin and get the fire started.”

“George swears off doing ‘you know’ after being caught by his mother, causing her to throw her back out and ending up in the hospital. When Jerry proposes a contest to see who can go the longest without. Elaine and Kramer want in, but the four of them soon get into situations that test their will power to temptation.”

“The gang all loves the soup from a new, temperamental cook unofficially called the “Soup Nazi”. Jerry and his girlfriend are beyond affectionate, and their nickname “Schmoopie” drives George crazy. Elaine buys an antique armoire on the street, but it is stolen while being guarded by Kramer.”