Oscar Mayer Now Makes Lunchables for Adults; Just Like Their Predecessors, They Ain’t Too Healthy 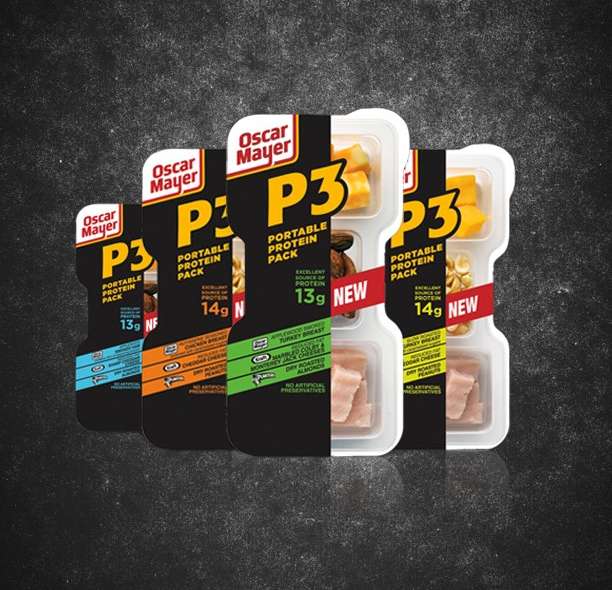 As much as we loved devouring our Lunchables as kids, there came a point when we grew older when we asked ourselves, “Hey, is this real food?” Hopefully at that point we stopped eating those pre-packaged “foods” of questionable origin. Perhaps Oscar Mayer realized people were onto their chips-and-salsa-as-lunch trick and decided to cater to a new market instead. The meat processing company is pushing its new P3 Portable Protein Packs to adults as a great post-workout meal, but really the packs are about as healthy as Lunchables for adults.

Playing off the latest trend for the high-protein caveman diet and its counterparts, Oscar Mayer is marketing its P3 Packs as a return to the basics. “Before there were powders, bars and goos, there was meat, cheese and nuts,” it writes on its website. The packs contain processed cubes of meat that curiously resemble dog food, nuts and blocks of low-fat cheese. Although Oscar Mayer wants you to believe that cavemen would’ve eaten these packs, the ingredients list says otherwise. Take the nutrition facts for Oscar Mayer’s applewood smoked turkey breast, for example, which, among other things, contains mysterious ingredients like cultured dextrose, modified cornstarch, cultured celery juice, sodium phosphate, cherry powder, annatto, cellulose powder, calcium sulfate and corn syrup solids. Yeah. Doesn’t sound like caveman food to me, either.

I guess when the P3 Packs were in development, Oscar Mayer forgot that when their former Lunchables customers grew up, they learned to read ingredients list. And pack snacks for themselves. Hell, some of them even went vegan.

If you’re looking for a laugh and more reasons to avoid eating these packs, check out the top comments on the P3 picture Oscar Mayer posted to Facebook yesterday.

« Parents Can Relax about Their Kids Using Social Media