Lindsey Lohan Speaks Out About Her Alleged Sex List 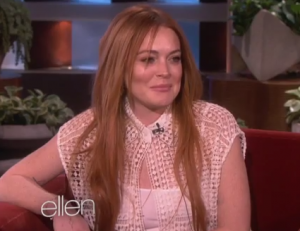 You’ve all heard of her. Lindsey Lohan has been famous in the media since she was only 11 years old. Although the actress is most famous for her up’s and downs, The 27-year-old’s most recent visit to “The Ellen Show,” went back in time, playing a clip from Lohan’s 2004 song titled “over”.

DeGeneres seemed to take a few jabs at Lohan when she admitted that she didn’t remember the star ever having a music career saying, “I don’t remember you actually ever singing. Did you sing longer than just on my show?” But of course, who can resist Ellen’s humor. The star didn’t seem to be bothered by this comment.

Some Fans will remember she actually did put two albums out during her time as a “singer”.  Lohan went on to say she was really nervous performing on the show that day, considering “Over” was a “really emotional song” as she had just broken up with someone.

DeGeneres teased her and asked if she remembered who it was that she broke up with. Lohan, laughing responded while rolling her eyes, “Apparently there’s a list of many guys.” Of course we all know who the song was written for. Lohan ended up revealing who it was, the young star at the time, Wilmer Valderrrama, whom she dated for 6 monthes.

“I was really upset … and that song I had written the day after, and we were still living together. I sang it in his house. Tortured him just recording the song so loud in his house,” she said.

At the Beverly Hills hotel, Lohan’s sex list was sldo revealed by a source showing in her own handwriting 36 lovers including heath ledger, Justin Timberlake, Juaquin Phoenix, and many other stars we all, as women, dream about.

At least from what we can see, Lohan is finally back on track and we are all looking forward to seeing this young star arise!

Anamorphic Sculptures That Only Reveal Themselves in Their Reflections »