How Did These 50 Big Brand Companies Get Their Names? 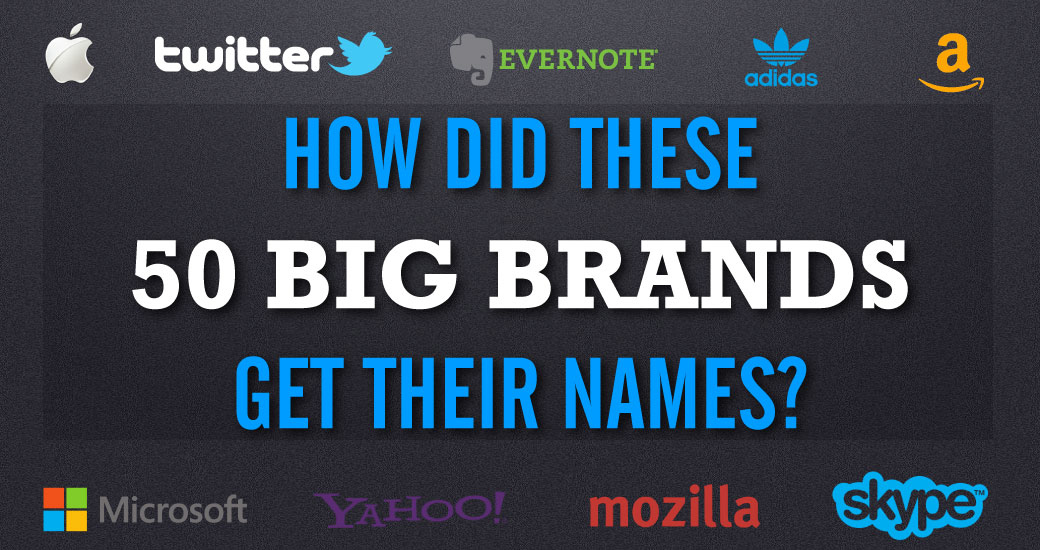 Ever wonder where some of the biggest companies got their brand names? Thanks to a Wikipedia list showing the etymology of hundreds of company names, it’s easy to learn the origins of many of the biggest brand names out there, including the 50 well-known companies here:

Originally called “U-Tote’m,” the convenience store chain was renamed in 1946 for its newly extended hours of operation, 7:00 am to 11:00 pm.

Adidas comes from the name of the founder Adolf (Adi) Dassler, combining Adi + Das to form the shoe brand.

Co-founder John Warnock lived in a house in front of the Adobe Creek, which inspired his company’s name.

Each of the letters in “Aflac” stand for a word in the company’s previous name “American Family Life Assurance Company of Columbus.”

Founder Jeff Bezos wanted to choose a company name starting with “A” so it would always be near the top of alphabetical lists. He changed the name from Cadabra.com to Amazon for the largest river in the world.

Apple is named after the fruit because not only was it co-founder Steve Jobs’ favorite, but he also worked on an apple orchard. The warm, simple and relatable name “Apple” also served to set the computer company apart from its competitors.

Arby’s name originated with the initials “R” and “B” which stood for the founders, the Raffel Brothers, and not “roast beef.”

The household product company was named for the arm and hammer of Vulcan, the Roman god of fire and metalworking.

The keyboard buttons of the first device made by the company resembled the blackberry fruit. Thus, the name.

Coca-Cola flavoring comes from coca leaves and kola nuts. Its creator John S. Pemberton changed the “K” in “kola” to arrive at perhaps the world’s most well-known brand name.

“Comcast” is a combination of the words “communications” and “broadcast”

Founder Pierre Omidyar first had a web consulting firm called Echo Bay Technology Group. When he created the auction web trading site, “EchoBay.com” was already taken by a gold mining company, so he went with his second choice, “eBay.com.”

Evernote’s name comes from a combination of “forever” and “note,” words that describe the service the app provides.

Facebook’s name comes from the books given to newly enrolled students at U.S. universities to help them get to know one another.

Garmin is named after the founders Gary Burrell and Dr. Min Kao.

Combine the first letters of “Government Employees Insurance Company” and you get the GEICO’s name.

Originally, “Google” was an accidental misspelling of “googol,” the number 1 followed by 100 zeros (or 10 raised to the power of a 100), a number which the search company’s founders thought reflected their goal of amassing and organizing extensive amounts of available information online. The domain “google.com” was available and the name stuck.

Groupon is short for “group coupon,” according to chief executive Andrew Mason.

The game and toy company’s name derives from the names of its founders, the Hassenfeld Brothers, Henry and Helal.

When the business plan for the company was created by Sabeer Bhatia, he tossed around many names ending in “mail.” He finally settled on “Hotmail” because it included the letters “HTML,” the language used to write web pages.

The first two letters in IKEA’s name are the initials of its Swedish founder Ingvar Kanprad. The last two are the first letters of the name of the property and village where he grew up: Elmtaryd Agunnaryd

Robert Noyce and Gordon Moore originally named their company N M Electronics. Later they wanted to change it to Integrated Electronics, but that name was taken. Instead, they used the initial syllables of Integrated Electronics to come up with “Intel,” and then purchased rights to companies with similar names, like Intelco, to avoid conflict.

Founder George Eastman’s favorite letter was “K,” because it is strong and sharp, so he wanted his company name to begin and end with that letter. He saw three benefits to the name he created: it was a trademark word, hard to mispronounce, and, at the time, unlike any word associated with cameras.

In 1935, Lancôme founder Armand Petitjean was vacationing in the French countryside, touring the ruins of the castle Le Chateau de Lancôme (Loir-et-Cher). Taken by the many wild roses growing nearby, he named his perfume company after the castle and chose the rose as its symbol.

McDonald’s is named after Dick and Mac McDonald, the two brothers who in 1940 opened the first restaurant in the ubiquitous chain.

Bill Gates created the name “Microsoft” because the company is dedicated to microcomputer software.

Today’s Mozilla and Netscape browsers are distant cousins who share a common ancestor by the name of Mosaic. While under development, the Netscape browser was known internally as Mozilla, a combination of Mosaic and Godzilla. (Netscape was to “kill” Mosaic and the company’s mascot bore a likeness to Godzilla.) A host of web tools and applications ended up being named the Mozilla Suite. After AOL acquired Netscape, the open-source Mozilla became independent.

Formerly known as The National Biscuit Company, the company abbreviated its name in 1971.

Nike is named after the Greek goddess of victory.

Pepsi is named after the digestive enzyme pepsin, which breaks down food proteins.

With slightly altered spelling, Reebok’s name comes from “rhebok” (Pelea capreolus), which is an African antelope.

Sky-Peer-to-Peer, a phrase which described the voice-over-IP service, became the name Skyper, which finally became Skype.

Sony’s name comes from the Latin “sonus,” which means sound. In addition, “sonny” is American slang which refers to bright youngsters; the founders believed they were “sonny boys working in sound and vision.” In addition, the name was chosen because “Sony” can be easily pronounced in several languages.

Starbucks’ name comes from the Moby-Dick character “Starbuck.” It is also a take on “Starbo,” a mining camp north of Seattle.

The famous fast food Mexican restaurant is named after the founder, Glen Bell.

Though co-founder Jack Dorsey rejected the name “Twitch,” he looked to the dictionary to find similar words. Once the founders came across “twitter,” meaning “a short burst of inconsequential information” and “chirps from birds,” they knew there was no better name for their social network.

Verizon’s name is the combination of the words “veritas” (Latin for truth) and horizon.

When founder Richard Branson and his partner started his first business, a record store, the two decided to call it “Virgin” because they were complete virgins at running and managing a business.

Well-known for designing race cars and luxury vehicles, Ferdinand Porsche wanted to produce an affordable car for the masses. The resulting product went by the name Volkswagon, German for “people’s car.”

The behemoth of retail is named after the founder Sam Walton.

Founder Dave Thomas named his company after his daughter Melinda, whose nickname was Wendy.

The high-end houseware and home furnishing company is named after founder, Chuck Williams, and his place of residence, Sonoma, California.

Xerox comes from the word xerography, derived from the Greek words “xeros” (dry) and “graphos” (writing).

In his book Gulliver’s Travels, Jonathan Swift created the word “yahoo” to describe people who are revolting in appearance. Yahoo! founders David Filo and Jerry Yang jokingly thought of themselves as “yahoos.” Remo Pollastri
I have always wondered about 'Yahoo". These are great insights into big name companies
Reply 52 years ago Rohan Kulkarni
Actually that's a backronym..it was invented to fit the company's name, and not vice versa..
Reply 52 years ago

How to Love Your Job »