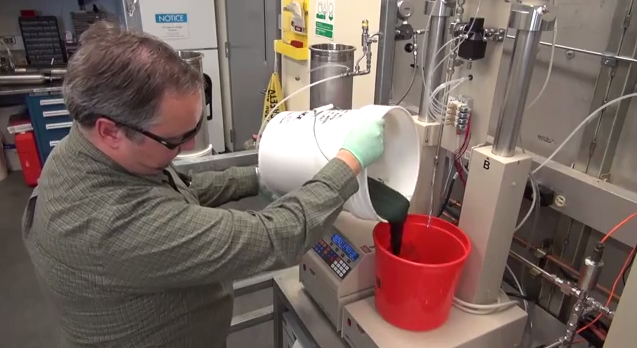 We all know the future of energy is in green technologies, but which ones will emerge? Good news, citizens of the earth, we may just have that answer. In a recent scientific breakthrough, engineers at the Department of Energy’s Pacific Northwest National Laboratory have stumbled upon a way to turn algae into bio-crude oil in less than 60 minutes! The very same oil can then be refined into gasoline to power your vehicle’s engines.

What has everyone excited is that algae is one of the most plentiful lifeforms on the planet and would make for a perfect candidate to transform into biofuel. You could replace all the petroleum in the U.S. with algae fuel powered by a farm that would take up only .42% of the country’s current landmass, whereas you would need half the country to grow enough soybeans to become a viable alternative energy option. This isn’t the first time scientists have turned algae into a fossil fuel, though it is the first time it was executed so quickly. The previous methods required way too much time and energy for the conversion, but the new process appears to have solved this problem by simulating what Mother Earth does over long periods of time in minutes.

“It’s a bit like using a pressure cooker, only the pressures and temperatures we use are much higher,” said the lead researcher, Douglas Elliott. “In a sense, we are duplicating the process in the Earth that converted algae into oil over the course of millions of years. We’re just doing it much, much faster.”

The solution also contains 80 to 90% water and results in a byproduct stream of material that contains phosphorus and can be recycled to grow even more algae. Talk about sustainability!

So when can you expect your car to go green for good? Sooner than you think, as the Department of Energy has already partnered up with Genifuel (jot that name down, savvy investors) to commercialize the process and make algae fuel competitive with the current market of nonrenewable oil sources.

« Amazon Launches Storybuilder: A Virtual Corkboard to Help Writers Visualize Their Next Script

The Classic Food Pyramid Vs. The Weight Loss Trapezoid »