Vivid Sydney: Where Art and Technology Intersect to Light Up Your Night 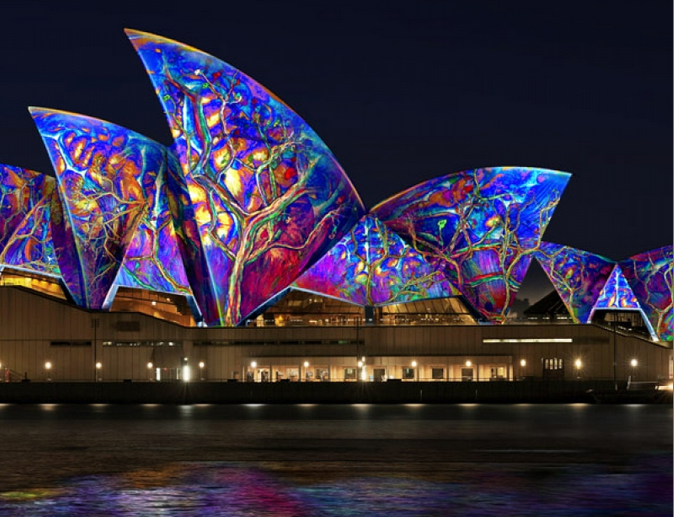 Starting today, there’s a new art exhibition in Sydney, Australia and everyone’s invited. The Vivid Sydney exhibit is a public light and music show that displays outdoor lighting sculptures and installations throughout the city downtown. The exhibit runs from May 23-June 9 and also features contemporary and cutting-edge music, with performances spanning several genres.

The free lights exhibit is created to illuminate iconic architecture around Sydney and showcase the city’s magnificent infrastructure. It is described on the exhibition’s website as “a magical celebration of light-design excellence and the world’s largest outdoor ‘art-gallery’: a unique Vivid Sydney experience.”

There are 80 exhibits, each of which uses light art sculptures, installations and projections to transform some part of Sydney into a colossal canvas for artists to display their magical artwork.

Here’s a peak at a few of the exhibits here and see the rest on the Vivid Sydney Lights site:

Running for the second year, Luminous Nights at Darling Quarter illuminates the largest façade in the Southern Hemisphere, the 150 meter tall Commonwealth Bank Head Quarters. It displays interactive art and gaming applications, celebrating technological advancement and creativity. People viewing the exhibit can take part in the digital innovation by working with Luminous Support Staff to control the giant screen and change the illumination on the façade.

Lighting of The Sails

For Vivid Sydney‘s most public event, international artists 59 Productions created the Lighting of The Sails where they project light art onto the sails of the Sydney Opera House. 59 Productions will take the Opera House on a journey through time, displaying the birth of civilization and architecture to our most modern advancements and achievements in technology and innovation.

One of the most popular Vivid Sydney displays, Light The Bridge gives people the chance to create their own projection for the bridge, using an interactive touchscreen. The exhibit has more than 100,000 energy efficient LED lights that illuminate the bridge and its arches, bringing the iconic Australian structure to life.

The Urban Tree Project is a digital projection that transforms the MLC building into a living tree, right before your eyes. As you gaze upon the architecture amidst the urban landscape, the tree sprouts and grows quickly to engulf the entire building. The display touches upon deeper themes surrounding the environment and nature versus man, including the juxtaposition of a natural landscape to an urban one and the impact our society and lifestyle has on the Earth.

The pixel-mapped light sculpture is a 3D structure built in Martin Place, right in the middle of Sydney’s corporate architecture. People can walk in and around this interactive, geometric sculpture and can even use the touch-screen controls to change the color, intensity and special effects of its lights.

The Pool is an interactive canvas made from giant, concentric circles that change the light’s effects and color when stepped on. There are more than 100 circular, independent platforms that interact with and “listen” to its environment, using your movements to modify its lights. For instance, it can sense foot placement, the force at which you land on a platform and the speed at which you jump off of it, creating a constant flow of changing colors.

For the first time, Vivd Sydney will have an exhibit on the Sydney Harbor with Harbour Lights. Cruise vessels, ferries and water taxis will all be equipped with their own LED lights, illuminating the ships as they move across the water. The lights will change color as the vessels enter different areas of the harbor called “color precincts,” which are computer-controlled and equipped with geo-positioning. This exhibit can be enjoyed by anyone, whether they are viewing it from land or cruising through the harbor on a vessel of their own.

Take a Walk Through This Imaginary World of Living Plant Sculptures »