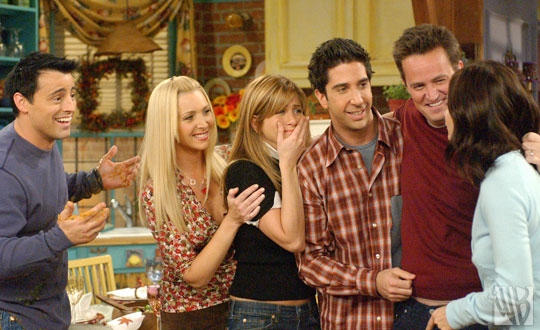 It’s been a whole decade since we said goodbye to our dearest Friends from the hit TV sitcom. In honor of this ten-year anniversary, we’re taking a walk through time with the Top 10 Friends episodes, according to TV.com user ratings. Fitting for the occasion, the very last episode ranks number one while the second-to-last episode ranks fifth. (Both these episodes together count as the series finale.) For the full Friends experience, we’ve also included accompanying video clips and TV.com’s episode summaries. With the past and continuing sitcom’s popularity, it comes to no surprise that there was an abundance of highly rated episodes, but these ten are the absolute top-ranked. Although ten years have passed since the show’s end, our coffee shop-going, New York City-adventuring friends still give us many good laughs as we watch the episodes time and again.

10. The One with All the Thanksgivings (Episode 8, Season 5)

“Although the Thanksgiving meal is great, Chandler is still moody over his parents’ divorce during the holiday when he was a boy and Ross is depressed about his second divorce. The group reminisces about their worst Thanksgivings in order to cheer them up, and Monica’s worst memory is revealed.”

“Phoebe tries to get in touch with someone to warn them that Rachel’s on the way to the wedding. Meanwhile, Ross and Emily’s parents meet at the wedding rehearsal dinner.”

“A drunken Rachel is persuaded to call Ross and reveals her feelings for him on his answering machine. And when he finds out, he must make the choice between her and Julie. Meanwhile, Monica finds work as Chandler’s personal trainer and Phoebe has a hard time trying to get her boyfriend to have sex with her.”

“Ross is in a hurry to get everyone dressed for an important banquet at the museum, but no one is co-operating.”

“Monica and Chandler return from their honeymoon with stories of a couple that they met on the flight back, but soon discover that the couple gave them a wrong number. Ross and Rachel disagree over who came onto whom when they hooked up. He wants to prove it and accidentally reveals that he has the encounter on videotape.”

“After getting his big break, with Days of Our Lives, Joey pays Chandler back with $812 and an extremely tacky bracelet. Also, an unemployed Monica is hard up for money. And Monica and Rachel’s prom video reveals Monica’s former girth, Rachel’s former nose and the way Ross has always felt about Rachel. This video brings Rachel to forgive Ross for the list.”

“Ross wants to be with Rachel, who still has her heart set on Paris. Erica goes into labor with surprising results. Meanwhile, Joey decides to get a housewarming gift for Monica and Chandler, and Mike tells Phoebe he wants a family.”

“Joey and Chandler guess all the items that Monica and Rachel had in a bag after coming home from the market. This starts a competition between the boys and the girls, a question-answer game created by Ross. The team that knows the most about the other one wins. Meanwhile, Phoebe goes to the doctor to get the embryos implanted in her uterus.”

“When the friends discover that Ugly Naked Guy is moving out of his apartment, Ross leaps at the opportunity to get his own place again. Phoebe finds out about Monica and Chandler’s relationship, and tries to get them to reveal the truth by seducing Chandler.”

“Ross and Phoebe go after Rachel so that Ross can tell her how he feels, but a big mistake puts the plan in jeopardy. Monica and Chandler finish packing their things after they come home with their new children, while Joey loses Duck Jr. and Chick Jr. in the old Foosball table.”