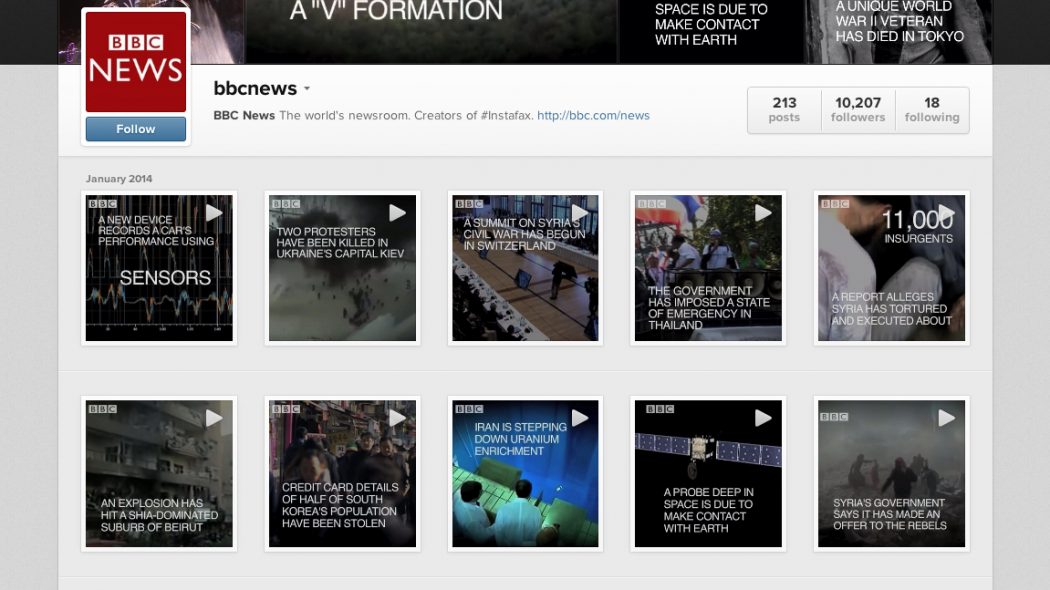 To cater to busy users on the go, BBC News is publishing short-form news stories as videos on Instagram. The initiative, called “Instafax,” is still in testing and has covered a variety of world news topics from the state of emergency in Thailand to the heat wave in Australia.

Some videos are more useful than others. For example, this breaking news video about the first two fatalities in the Kiev unrest is informative enough:

On the other hand, this video about the current summit on Syria’s civil war doesn’t do much besides show pretty footage of Geneva:

This video seems uniquely fitted to the Instafax genre, taking advantage of Instagram’s visuals to make it easier to explain a topic that would have been complicated to describe in writing alone:

All in all, I think there is potential for these short-form chunks of news video in the Web, but there is still work to do to ensure that video is used to every story’s advantage. I’m also unsure Instagram is the most appealing place to host the BBC’s short-form videos; most of the BBC’s Instagram videos receive hardly over 100 likes, though the BBC has over 10,000 followers. Perhaps readers would prefer to engage with the BBC’s videos over Facebook or on the BBC’s site itself. And the current intro and exit, along with their annoying sound effects, need to be axed.

What do you think of the BBC’s new Instagram initiative?

« The Rise of Mobile and Native Ads In the Social Stream

Internet Rehab: A Behind the Scenes Look at the Dangers of Online Addiction »