Which Tech Companies Are Protecting You and Your Data From the Government? 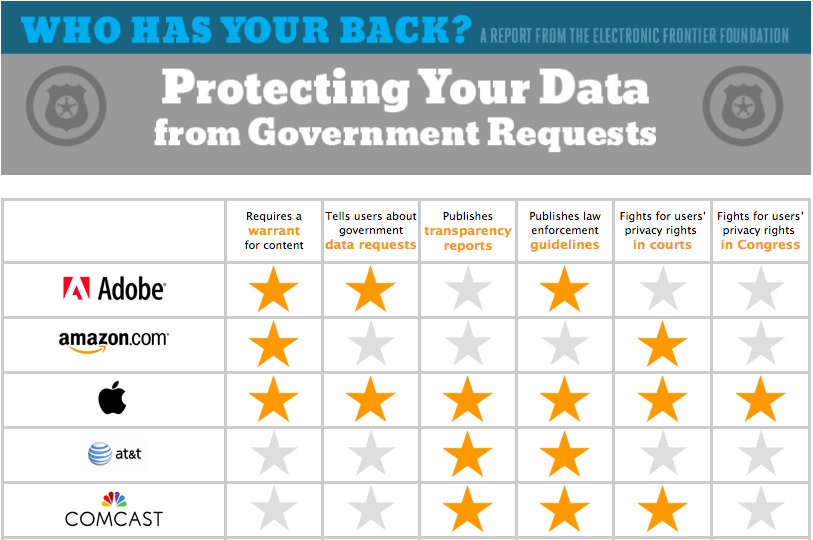 Every year the Electronic Frontier Foundation releases a report on which tech companies are being nice with your data protection and which are being naughty. The thing about the Internet these days is that we are entrusting our very sensitive and private information to tech companies. Especially with the rising issue of mass surveillance, it’s nice to know what you are getting into when you give these companies access to important information like photos, conversations, social connections and location data.

In this report, EFF examined the policies of major tech companies to analyze how committed they are to protecting user data. With these insights, users can make informed decisions about who they give access to their data, and to what level the government is able to access this user data. The EFF also hopes this will provide incentives for companies to improve their transparency and practices on data protection, as well as advocate for user privacy.

The companies were evaluated across six categories:

1. Do they require the government to obtain a warrant to get content of user communications? This makes sure that private messages from companies like Facebook and Google are treated consistently within the Fourth Amendment.

3. Do they publish transparency reports? These reports include how many times the government has requested user data and how often they have given that user data to the government.

4. Do they publish law enforcement guidelines? This includes the companies making public their policies and guidelines that explain how they respond to data demands from the government.

5. Do they fight for users’ privacy rights in courts?

6. Do they publicly oppose mass surveillance on the policy level?

Many improvements have arisen since the previous year. For instance, several companies now issue transparency reports, such as AT&T, Verizon and Comcast and the majority of the tech companies oppose mass surveillance. Two greatly improved companies are Apple and Yahoo because of their improvements in government access policies.

Snapchat, AT&T, Comcast and Amazon have the least number of stars and lag behind in data protection. However, Amazon received its two stars because it requires warrants from the government to request user data and it fights for user privacy in courts. Snapchat is the most troubling company in the report given it is the only company with one star – for publishing law enforcement guidelines – but holds extremely sensitive user data.

Are the tech companies doing a good job protecting your sensitive data?

This Artist Turns Trash Into Art By Creating Funny Monsters »