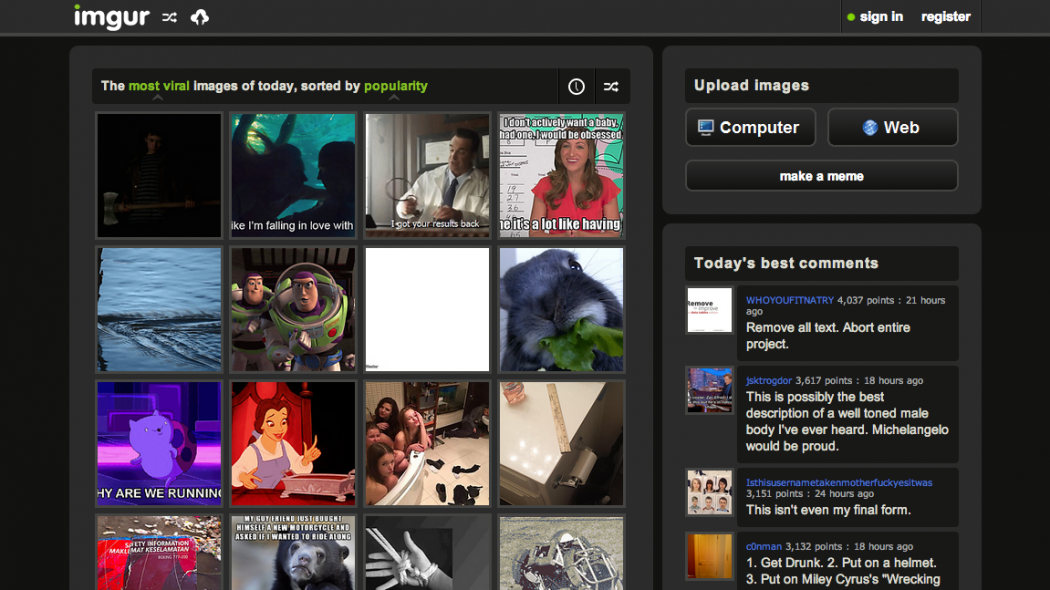 After five years of bootstrapping its way to profitability, Imgur announced today a $40 million funding round raised through Andreessen Horowitz. The funding will go toward product development, growing Imgur internally and growing Imgur’s user base worldwide. Reddit, the community for which Imgur was originally built, contributed to the round.

Imgur was created in 2009 by then-Ohio University student Alan Schaaf as a simple but fast image sharing site for the Reddit community. With no funding, Imgur has since grown into the 51st most-trafficked website in the world according to Alexa, with over 130 million unique visitors each month and a strong mobile presence. The company has since won the Best Bootstrapped Startup Crunchie award two years running in 2012 and 2013.

“It’s been an awesome experience to see this little idea to make an image sharing tool that didn’t suck blossom into an Internet entertainment hub with the most engaged and unique community anywhere on the web,” said Schaaf, Imgur founder and CEO. Though initially it wasn’t his plan to seek investment, Schaaf seems excited about what Andreessen Horowitz general partner Lars Dalgaard will bring to Imgur. “Lars completely gets what we’re trying to accomplish, and has pledged to help us conquer the Internet,” Schaaf said. Along with the investment, Dalgaard will take a seat on Imgur’s board of directors.

The funding round also makes Imgur’s relationship with Reddit official. Though for years Reddit users have used Imgur to share images, there were never formal ties between the two companies until now.

Imgur’s Expansion into the Future

As Imgur grows more ambitions and begins expanding its site, it plans to up its advertising game. Advertisements are currently Imgur’s largest source of revenue according to TechCrunch. In January Imgur launched analytics for companies advertising on its site, and over time the company hopes to improve the quality of the ads it sells.

For users, Imgur also plans to launch a new content discovery feature that will make it easier for people to find images of special interest to them. Imgur also aims to improve the mobile experience. The site currently offers apps for iOS and Android along with a meme generator for mobile devices.

How else does Imgur plan to use its new funding? By doubling or tripling its 13-person team over the next year.

All in all, Schaaf seems pleased with Imgur’s prospects and funding round. “The only sad part is that we won’t be eligible for any more Best Bootstrapped Startup Crunchies,” he joked.

What new features would you like to see on Imgur?