This Prototype Camera Uses Your Brainwaves to Take Pictures Automatically 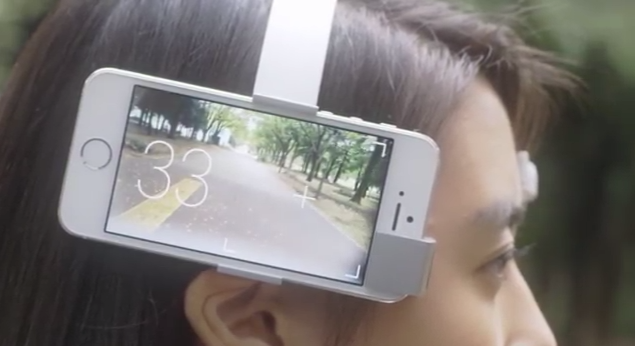 Have you ever thought about taking a picture but didn’t feel like going through the actual motions? In what looks like a Google Glass spinoff, a new prototype camera in Japan has designers strapping iPhones to their domes to take pictures based on their brainwave activity or emotions. The working prototype, called Neurocam, monitors the electroencephalography (EEG) signals along the scalp to trigger animated GIF recordings. The device also happens to be invented by the makers of the brainwave-powered Hello Kitty ears too.

While the image of an iPhone strapped to someone’s skull may be humorous and have the ring of a viral hoax, Fast Company reached out to Neurocam and found that the group claims the apparatus is very real yet still very experimental. The group said, “We’re using the iPhone so that both the analysis and video recording can be done on a single device. This is still a concept model so there is a possibility to turn this into a wearable camera.”

How it works is the headband has sensors that monitor your brain signals. The iPhone application then uses an algorithm to identify patterns in the electrical signals for signs of “interest” in something in your view. If your interest passes a specific threshold, then the Neurocam will record a five-second GIF without you lifting a finger or literally giving it any thought.

Fast Company also pried for more details about the pseudo-scientific iPhone window into your head by Neurocam, but the company hasn’t yet disclosed details regarding how the interest signal is calculated based on the EEG input.

Lawmakers and others have already been creeped out by the potential invasion of privacy from wearable computing devices like Google Glass, but this could take things to a whole new level. The process could even be reversed to start displaying people’s psychological states or emotions for everyone to see literally on their heads.

What do you think would happen if a product like this really did enter the market?