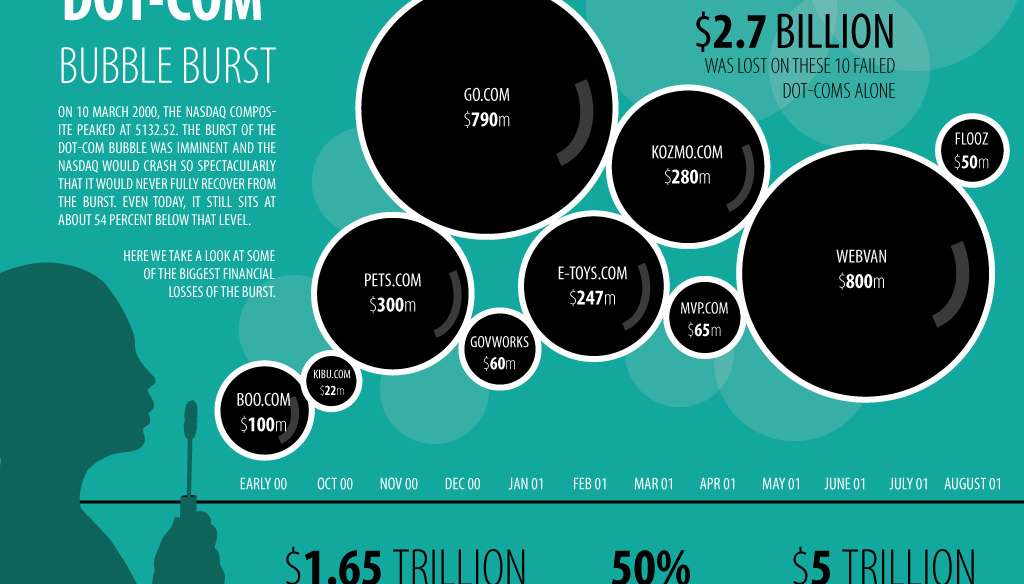 On Friday, the tech-heavy NASDAQ stock market index closed at 4,000, down almost 10% from its post-recession high. That’s got Wall Street recalling the burst of the dot.com bubble.

In March 2000, creator and CEO of Facebook Mark Zuckerberg was 15 years old. That same month the NASDAQ peaked at 5,132 points. And then the bubble burst. The market crashed, not hitting bottom until the 1,108 mark in 2002.

It turned out that tech stocks were wildly overvalued, as the infographic below makes plain. Investors were betting that unprofitable companies were worth billions. Sound familiar? They don’t call it speculation for nothing.

When Facebook went public in May 2012, it was the biggest IPO in internet history, yet the stock initially lost value. From a low of about $27 a share, the social media company (which is listed on the NASDAQ) has since climbed to a high of over $71 per share, an almost threefold increase. On Friday, FB closed at $58.53. According the Guardian, Facebook earned US$1.5 billion in profit in 2013. At its high point, the company was valued at over $100 billion.

Facebook may be worth $100 billion. It may be worth more. Of course, it may soon be worth much less. And the same is true for other rising stars such as LinkedIn, Twitter, Zynga, and Pandora.

No predictions here. We’ll just have to wait and see.

Will you be betting on tech stocks or cashing in?

« Meet the Coolest Dog Ever: Jiff the Pomeranian