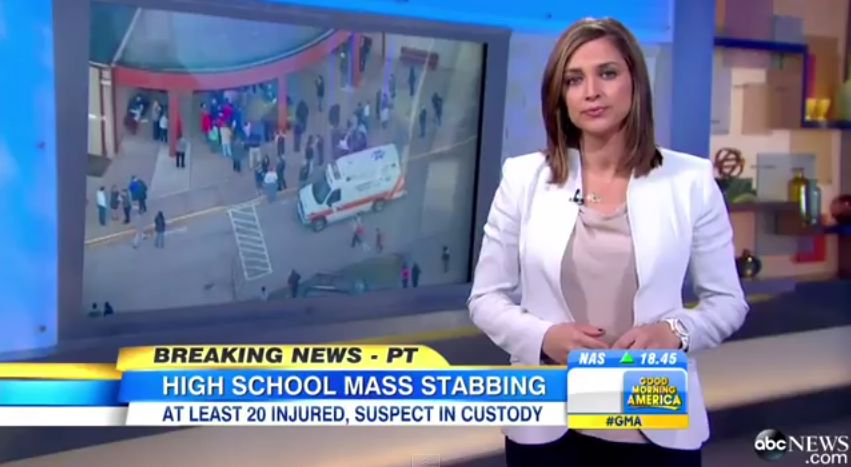 Today, Wednesday, April 9, a student at a Pittsburgh-area high school went on a stabbing spree, injuring 20 children and sending three into surgery. Stab victim Nate Scimio, sophomore at Franklin Regional Senior High School, alerted the school to the stabber by pulling the fire alarm. He later posted a selfie to Instagram from the hospital.

Scimio’s Instagram photo has already accumulated over 2000 likes and 500 comments, including requests for interviews and support from students and friends. But not everyone approves of the selfie; some commenters are accusing Scimio of using the mass stabbing to draw attention to himself.

According to early reports, the 16-year-old attacker, whose name is being withheld, was first confronted by the school principal and then tackled by officers, who handcuffed and took him into custody. Students suffered serious and, in some cases, life-threatening injurires, according to Dr. Chris Kaufmann of local hospital Forbes Regional who spoke with CNN. Two children went into surgery immediately for wounds and one is set to go into surgery tomorrow morning.

Since all of the students stabbed are expected to survive, perhaps Scimio’s hospital selfie seems more appropriate. But many still believe that his posting the photo was self-promoting and callous. His detractors see the selfie as more evidence that social media is hacking our lives.