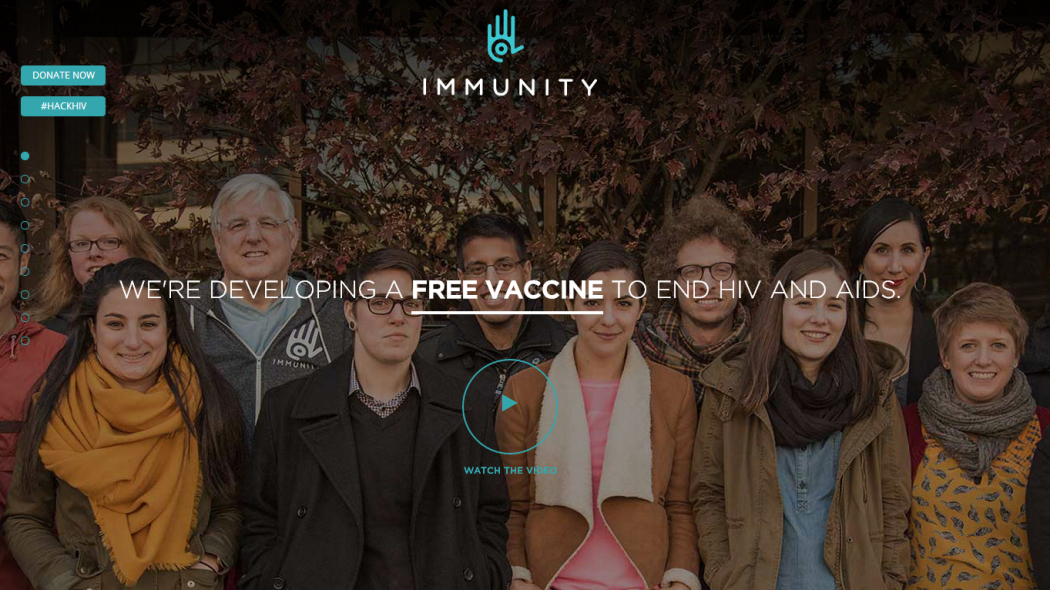 Did you know that super powers actually exist? About one of every 300 people was born with a natural power: immunity to HIV. These “HIV controllers” have provided scientists a genetic blueprint to recreate the conditions any body needs to be immune from the deadly HIV virus. Using this research, the Immunity Project was able to hack the HIV lifecycle to potentially bring you the same life-saving immunity as these HIV controllers.

The Immunity Project is a nonprofit startup initiative backed by Y Combinator that’s dedicated to producing the world’s first HIV-AIDS vaccine, and they want to give it away to everyone in the world for free!

Right now, over 35 million people have AIDS, which kills close to 5,000 folks a day according to Dr. Reid Rubsamen, CEO of the Immunity Project. Rubsamen said:

Our goal is to give away our vaccine to the world for free. We want to make everyone a controller. We want to give everyone that superpower.

How the HIV-AIDS Vaccine Works

The Immunity Project used advanced Microsoft e-Science machine learning algorithms (similar to spam filtering software) to sift through the blood samples of HIV controllers to identify the virus surface targets present in those individuals as ways to formulate the ingredients of its vaccine prototype. Through studying the way controllers fight off the virus, the researchers might have discovered a way to cripple any further spread of the disease. Dr. David Heckerman, the creator of the Microsoft spam filter and eScience Research Group lead, observed how both spam and HIV rely on spreading and mutating rapidly, yet have core components to their makeup that cannot mutate or change. Therein lies the potential cure to AIDS.

Sam Altman, one of the partners at the highly-acclaimed Y Combinator startup accelerator program that took an interest in backing the project, told Fast Company:

Imagine a world where vaccines are developed for a tiny fraction of the big pharma cost and given away for free to everyone who needs them. We thought that work done by Microsoft Research that underlies this was really interesting, and we’re always interested in areas where software can change how things are done. Technology means doing more with less; this is an extreme example. I spent a fair amount of time with this group during their application process and am personally donating both money and blood.

So how is this different from previous vaccine attempts? This is the first vaccine in the history of medicine to be developed using cognitive learning technology and could be a major breakthrough in medical science. It’s also considered safe as it doesn’t contain any other hard-to-control viruses as countermeasures or rely on you for an antibody response. And the good news is that it doesn’t require refrigeration, either, and instead will rely on a nasal dosage delivery mechanism that could significantly increase the likelihood of its successful distribution across places in need like Africa.

Instead, the medicine uses epitopes of the HIV controllers and chemicals called TLR-based immune adjuvants that are already being deployed in other FDA approved drugs and clinical trials. Now with the vaccine ready, the Immunity Project is looking to immediately start the first phase of human trials in both the U.S. and South Africa as soon as they can raise $25 million to fund the study.

See the proposed timeline highlighting the target date for manufacturing the drug for the various clinical trial stages needed for FDA approval:

First the Immunity Project wants to prove the vaccine really works in one final experiment before launching a Phase I clinical study. For this study, the Project is seeking $482,000 in crowdsourced funding here.

If the method is proven to be effective, the effort will have successfully immunized human blood against the HIV virus. But to do it, they are going to need our support. Do you want to help end HIV and AIDS for good?

« 300: Rise of an Empire Is Coming to Rock Your Socks Off

Comparing It to an Infectious Disease, Researchers Predict Facebook Will Lose 80% of Its Users by 2017 »