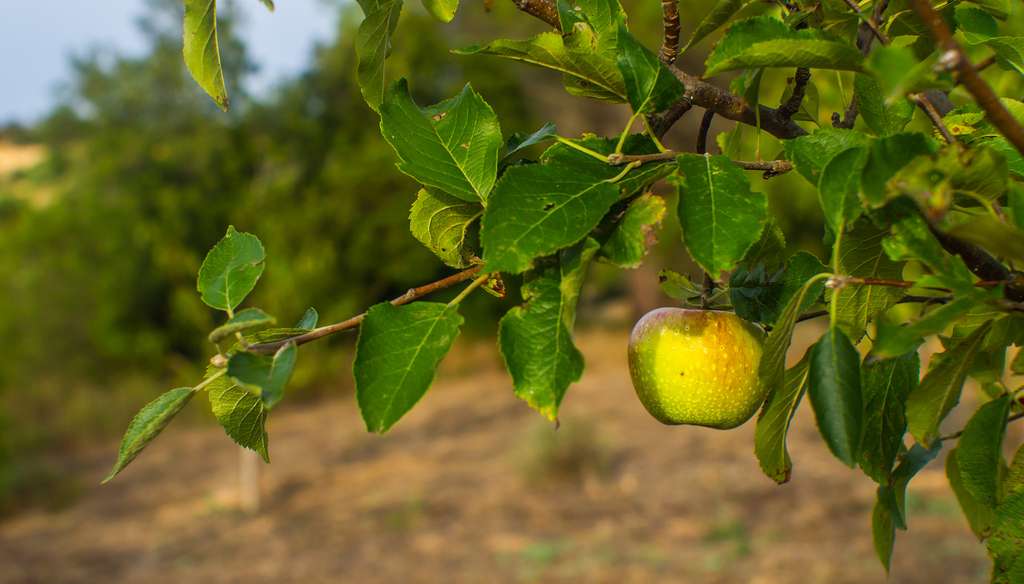 In the history of mankind, only Adam and Even have eaten from the Tree of Knowledge. That may soon change. Bio-artist Joe Davis plans to create a living Tree of Knowledge, using Wikipedia and apple trees. With the help of researchers and mathematicians, Davis has created a method of inserting 50,000 Wikipedia pages into the DNA of apple trees, creating Malus ecclesia, a genetically modified Tree of Knowledge.

The team developed a code using the four letters A, G, C, and T, which correspond to DNA’s chemical bases. Next they plan on encoding the entirety of Wikipedia using only the four DNA letters. After that geneticists will convert the text into strands of DNA that won’t actually change the core genetics of the apples.

Davis and team will then transfer the coded text into the apple DNA by a bacteria that inserts its own genome into plant cell walls. In an interview with The New Yorker, Davis stated that he does not “want it to make any phenotypic change in the size, taste, texture, or health of the apple.” This is why this insertion method was chosen, as it will not alter any of the existing characteristics of the apples.

But because the bacteria can only hold so much DNA – only about a few thousand words – the Wikipedia text will have to be spread out over several apples and trees. Davis also told The New Yorker that he “can fit the whole Wikipedia in a small forest, in—let’s call it a very large grove.” Each branch of each tree will have apples with different parts of the Wikipedia pages, and together they create a collective Tree of Knowledge.

The project is part of Davis’ art residency at Harvard Medical School’s genetics lab. Davis decided to use the oldest strain of apple DNA to keep the project closely connected to the biblical Tree of Knowledge and Forbidden Fruit in Judeo-Christian religions. Interestingly, the apples from Davis’ project are actually forbidden to eat as the Animal and Plant Health Inspection Service of the U.S. Department of Agriculture has stringent rules against the unregulated consumption of genetically altered plants.

It seems that Davis’ modern-day Tree of Knowledge truly brings science and religion together in a very close and real way. You can listen to te conceptual artist talk about the project at the Chaos Communication Congress in Hamburg, Germany: Dennis Coble
As I recall, the Tree was actually The Tree of Knowledge of Good and Evil, not quite the same as the Tree of All Knowledge :)
Reply just now Chris Clyne
so how would one then know if all things were either good or evil? That statement makes no sense brother...like saying to someone who has 100 pennies that they dont have a 1 dollar bill. The argument is apples & oranges ;)
Reply 52 years ago

Dennis Coble
Chris, the difference being this ~ being naked and ashamed, instead of just being naked, and knowing it.
Reply 52 years ago

Chris Clyne
Dennis Coble ok, I get what you're saying. Forcing that realization on people who are not ready for that knowledge tho is detrimental to people's minds.
Reply 52 years ago