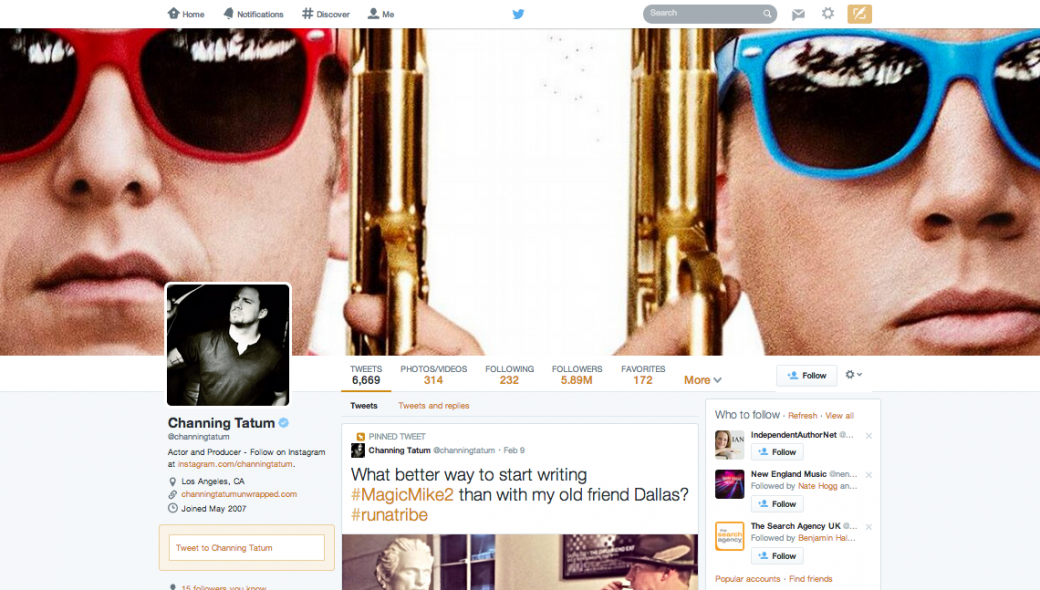 When it comes to social media, images are golden. That’s why Twitter is taking a leaf out of Facebook’s book and redesigning its user profiles to be more visual than ever before. With new widescreen headers and larger profile pictures, you might not be able to tell the difference between your Facebook profile and your newly redesigned Twitter profile!

As you can see in the screenshot of Michelle Obama’s profile above, the redesign lets users choose a full-width header image to start their profile off. As you scroll down a profile, you’ll also see a slight parallax effect as the header scrolls out of view.

In addition to these new features, the new Twitter profile design brings a number of options for emphasizing special tweets. First, the redesign highlights your most engaging tweets by making the tweets with the most favorites, retweets and replies slightly larger than others. The redesign also allows you to pin important tweets to the top of your profile. Finally, the redesign lets you filter the Twitter profiles of others three ways: Tweets, Tweets with photos/videos or Tweets and replies.

The redesign is available today with a small group of users, Twitter announced, including Michelle Obama, Channing Tatum and Floyd Mayweather. New users, too, will start in with the new profile design. Over the coming weeks Twitter will roll out the new features to all users.

This redesign complements features Twitter recently added to pictures uploaded to its site. Users can now tag friends in images as well as upload multiple images at a time. The profile redesign will make it easier to find these enhanced photo tweets on users’ profiles.

If it continues on its current trajectory, Twitter could end up becoming a whole different kind of social network than what it started out as. No longer focusing on of-the-moment text posts, Twitter could become a place for quickly sharing pictures. While this would certainly make Twitter more visually appealing, I fear that such a pivot would take away from the democratic nature of text-only posts on Twitter. Right now every tweet is given an equal chance at receiving engagement regardless of who posts it or whether the tweet includes an image. But if Twitter starts making engaging tweets larger, it’s possible that tweets from lesser-known people could become buried among tweets by snap-happy celebrities, which would be a shame.

Yesterday it was announced that Twitter acquired Android lock screen app Cover in a likely attempt to gain a larger presence on mobile.

What do you think of the Twitter profile redesign?

11 Internet Math Equations That Help Make Sense of the Web »