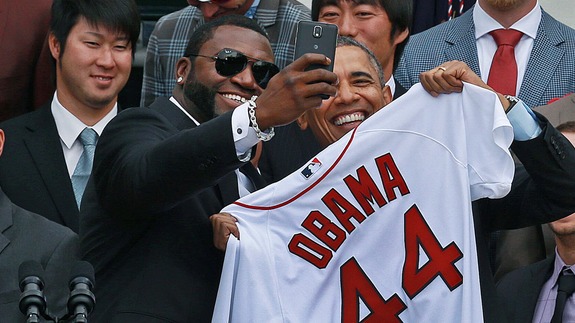 A few days ago, David Ortiz took a selfie with President Obama. The two smiled and posed as Ortiz snapped the photo. Ortiz then asked, “Do you mind if I take my own?” Obama responded, shouting out to the crowd in a joking tone, “Oh, he wants to do a selfie!”, and Ortiz laughed, “Yes, sir! Yes, sir.” Little did we or the Obama administration know, the entire interaction may have been a publicity stunt by Samsung which sponsors Ortiz.

Once finding out about the sponsorship, the White House told Bill Plante, CBS News senior White House correspondent, that they were completely unaware of the selfie’s promotional purpose. Although White House officials also said they are “not happy” about it, they have not made any efforts or requests to remove the selfie from Twitter.

Samsung admitted to New York Daily News that the company “worked with David and the team on how to share images with fans,” but it “didn’t know if or what he would be able to capture using his Note 3 device.”

Ortiz claims that his act was spontaneous and not in response to any specific instruction from Samsung. Either way, Samsung was able to use the photo for promotional purposes, as Samsung Mobile retweeted the selfie to market its Galaxy Note 3. After the famous Ellen Degeneres’ Oscars selfie, the Ortiz photo is the second time Samsung has used a notable, celebrity selfie as promotion.

Big Papi, Big Selfie. RT @DavidOrtiz What an honor! Thanks for the #selfie, @BarackObama pic.twitter.com/3I7ckLjquf

Joining Snapchat and Instagram, Vine Now Lets You Send Private Video Messages to All Your Contacts »