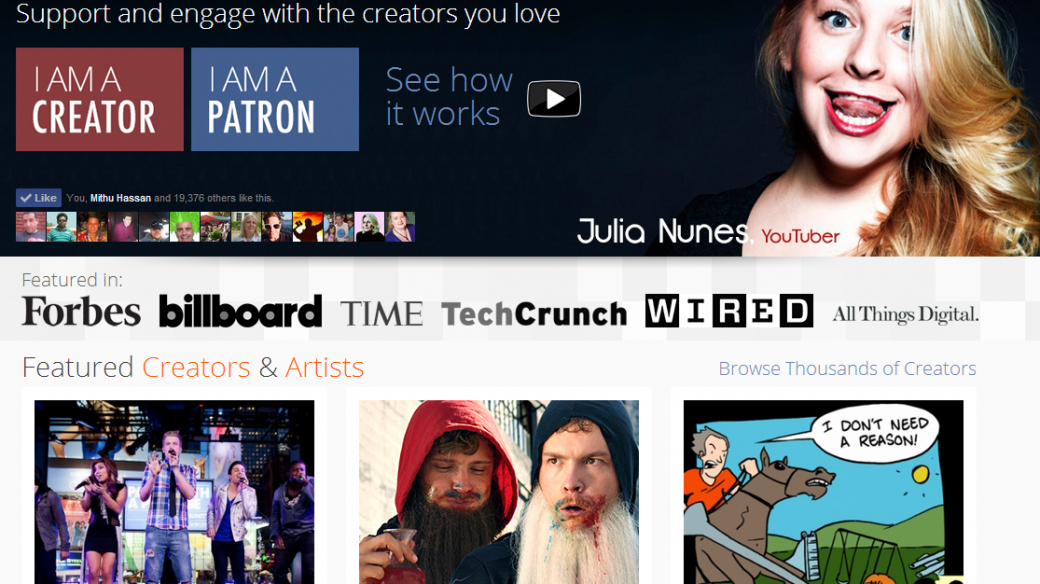 If you’re familiar with crowdfunding and sites like Kickstarter and Indiegogo, you know these are often intense projects that require a lot funding in a short amount of time. Traditional crowdfunding is a great avenue to quickly launch and market new products, but it might not be the best way to raise funds for people who create content on a regular basis: like you bloggers, artists and musicians.

Patreon is a crowdfunding site for the ongoing projects of artists and other content creators. Fans can support their favorite work through monthly pledges or by release (like per video or song). The site was founded in 2013 as a means to empower digital content and patrons of the arts. There are over 50,000 patrons currently supporting 20,000 creators and projects launched to date, including some popular Web comic artists like SMBC and YouTubers like tech geek Chris Pirillo. The average pledge is $8 and the milestones are wide open according to Anthony Privitelli of the Patreon team. “Every creator has their own unique milestone goals from removing advertisements, to uploading a private video to their patrons, to buying new studio equipment,” Privitelli said.

It turns out Jack Conte, chief executive of Patreon, is a creator too and doesn’t even take a salary Anthony told me. Rather his income comes entirely from his own Patreon page.

I asked Anthony how the project got started and what to expect from the future of the platform. He told me:

Patreon came from the brilliance of our CEO Jack Conte. Jack is a multi-instrumental musician himself and a YouTuber who wasn’t earning enough from his Google AdSense to be a full time musician like he always dreamt of. So he basically turned to his fans from YouTube to see if they would throw him $1 or $5 for his next video… $5,000 later he knew he was on to something. So he called his freshman roommate from Stanford (Sam Yam, cofounder of Patreon) to build the site. Now harkening from modernday patronage we have Patreon – to support the creators you love.

Patreon is what you make of it! The only secret recipe for success on Patreon is having an engaged community around you. It doesn’t matter if you have a fan base of 100 people or 100 million people. What matters is the engagement!

Patreon is an interesting new player in the crowdfunding game that could shift the balance towards more permanent and sustainable efforts. Patreon also has an API in the making and we hope to allow creators and patrons to share their favorite campaigns on our content marketing platform soon too.

You can check out our new Patreon page for Screaming Social: The Comic here!