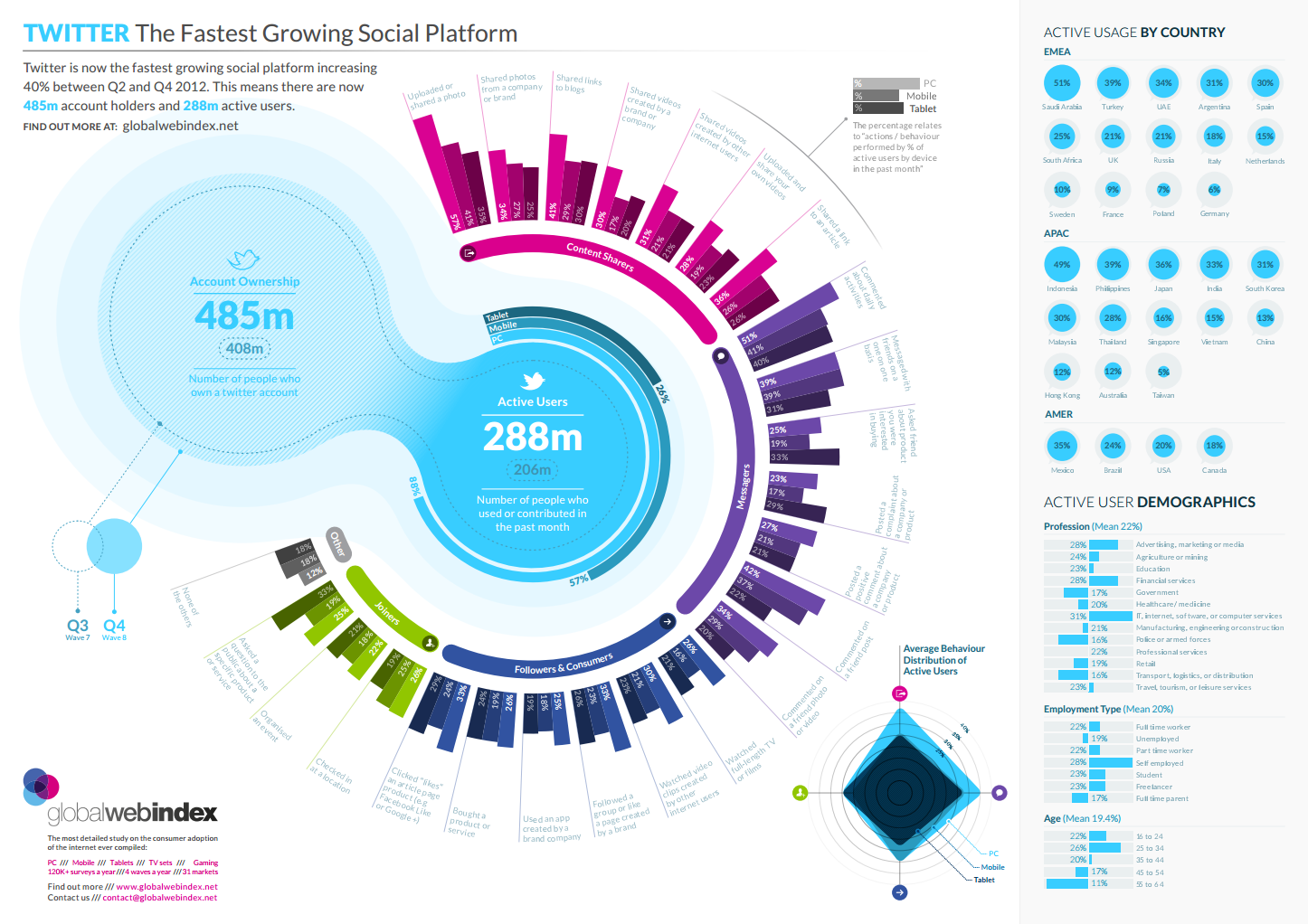 Did you know that Twitter is now the fastest growing social network in the world increasing by 40% over the last half of 2012? According to data by Global Webindex, there are 485 million total account holders and 288 million active Twitter users. This new visualization also gives an interesting glimpse into the demographics of the Twitter user base. The top 5 Twitter markets in terms of active usage by country are Saudi Arabia (51%), Indonesia (%49), Turkey (39%), Philippines (39%) and Mexico (35%) with the US trailing at 20%. Twitter is taking the world by storm yet still has a ton of room for growth in the US market where it hasn’t gone mainstream like Facebook. The people most currently likely to use the platform are either self-employed or in advertising, marketing or IT. This makes sense as Twitter has so much to offer small businesses, freelancers and entrepreneurs who are quickly discovering how Twitter can help them generate a ton of referral traffic and new leads. But more and more people are learning about the benefits of Twitter each day which explains the high growth rate, especially among the youth where 25-34 year olds now make up the leading demographic on Twitter and the highest adoption rate. Twitter is also setup well for explosive mobile growth in the next few years with over half (57%) of its traffic currently coming from mobile devices.

There are now more than 200M monthly active @twitter users. You are the pulse of the planet. We’re grateful for your ongoing support!

These numbers do appear a little high considering just in December, Twitter released a tweet declaring it surpassed 200 million active users. However, given it’s been over two months since that statement (which may have been a conservative estimate) and the rapid rate of growth, these numbers couldn’t be too far off now. Personally, Twitter is my favorite and most important network, because as a content curator, I value the speed at which news breaks on the site. Plus it’s just plain easier to openly network on Twitter meeting new people compared to other sites like Facebook, where you mostly see updates from your friends and promoted posts. Twitter serves you status updates from everyone you follow in an unbiased manner without any hidden algorithms controlling which posts you see (first in, first out). This makes the site attractive to businesses and along with its tightly coupled integration with Apple’s iOS devices, may explain the explosive growth Twitter is witnessing.

Are you on Twitter right now? If not, are you going to join up soon?
Also leave your Twitter handle in the comments, and we just might follow you (@DashBurst) if you have an interesting feed 🙂

Charlie Accetta
I think total user counts for anything worldwide in social media is misleading, unless there's a reading equivalent to the Babelfish. For instance, I find it hard to be socially interactive in Arabic, so there go all those potential Saudi followers. @charlielmo
Reply 8 years ago Harold Gardner
Does that include all the spam, robot, and fake accounts?
Reply 8 years ago Marcello Mari
No, we only survey real users
Reply 8 years ago Julie Gallaher
Great info Daniel. You can follow me @juliegallaher.
Reply 8 years ago

« Meanwhile, in a Parallel Universe…

My Phone’s Low Battery Warnings Are Getting Desperate »