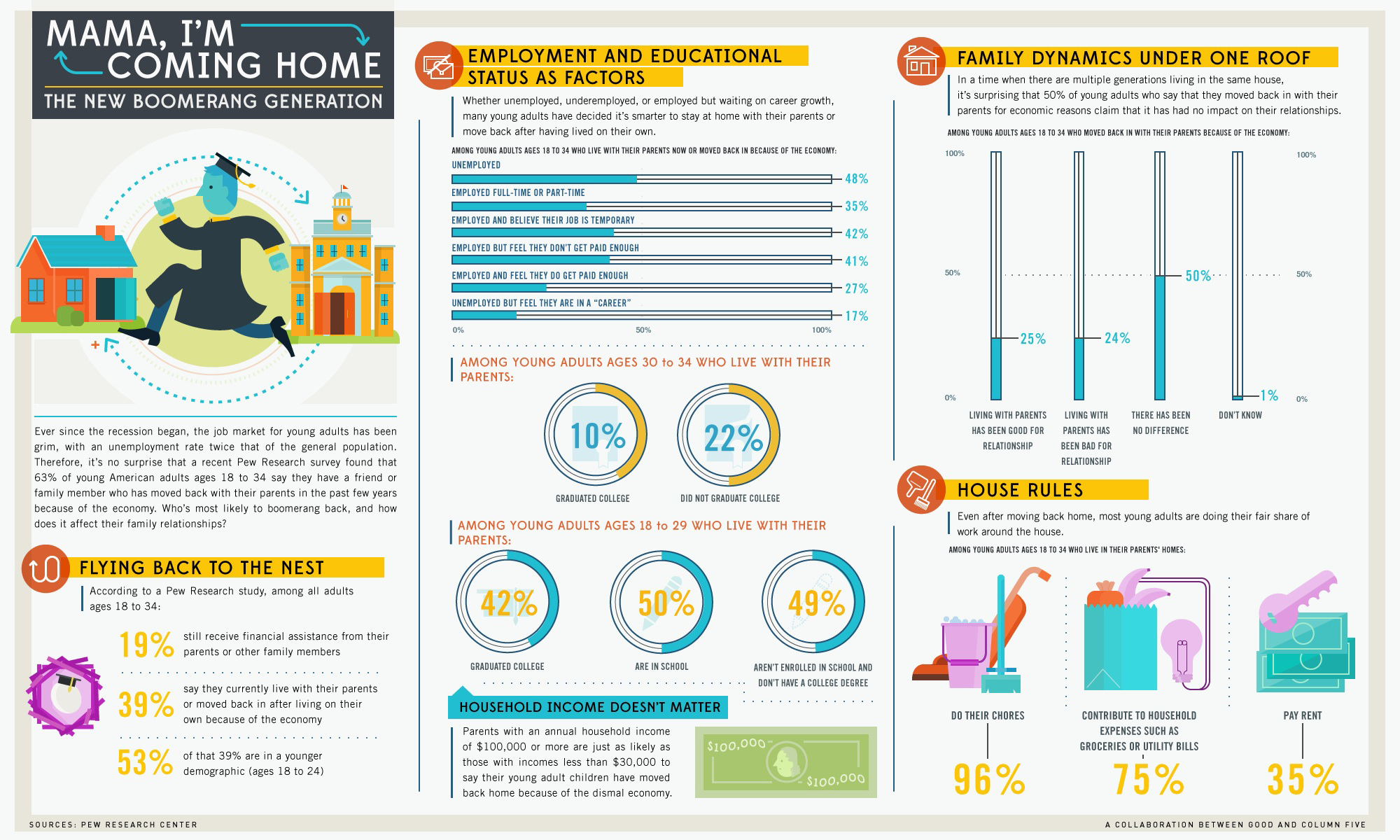 The job market has been very bleak since the beginning of the recession. But the unemployment rate for young adults is actually twice that of the general population! So it’s no surprise that Pew Research recently found that 63% of American adults ages 18 to 34 say they have a friend or family member who has moved back home because of the economy. Who is the most likely to boomerang back home and why?

Flying back to the nest

Among all adults ages 18 to 34:
19% still receive financial assistance from their parents or other family members.
39% say that, because of the economy, they either never moved out of their parents’ or moved back in after living on their own.

Employment and Educational Status as Factors

Many young adults—whether unemployed, underemployed, or even employed—have decided to stay home or go back to living with their families as they wait for career growth. Among adults ages 18 to 29 who still live with their parents, 42% graduated from college.

The overall household income doesn’t appear to factor in either, as parents with incomes of over $100,000 are just as likely as those with incomes of less than $30,000 to say their young adult children have moved back home because of the dismal economy.

Family Dynamics Under One Roof

With multiple generations often living under the same roof these days, it’s surprising that 50% of young adults claim it has had no impact on their relationships.

Parents save money not having to pay their children’s rent. Perhaps they stand to gain something else too. 96% of young adults living at home continue to do chores, 75% contribute to households expenses, and 35% actually pay their parents rent.

And if the economy can’t recover soon, as Ozzy put it, mama, we might all be coming home soon too… Hallie Cantor
I don't think the figures tell the whole story, as we don't know what kind of jobs these youngsters are applying for. Anything creative or cerebral will be either sporadic or lower-paying. Also, some cities like NY (where I live) are going to be prohibitively expensive for someone on menial or entry-level wages.
Reply 8 years ago Edr Gonzalez
what about you?
Reply 8 years ago

12 Creative Blocks Holding Back Your Writing »