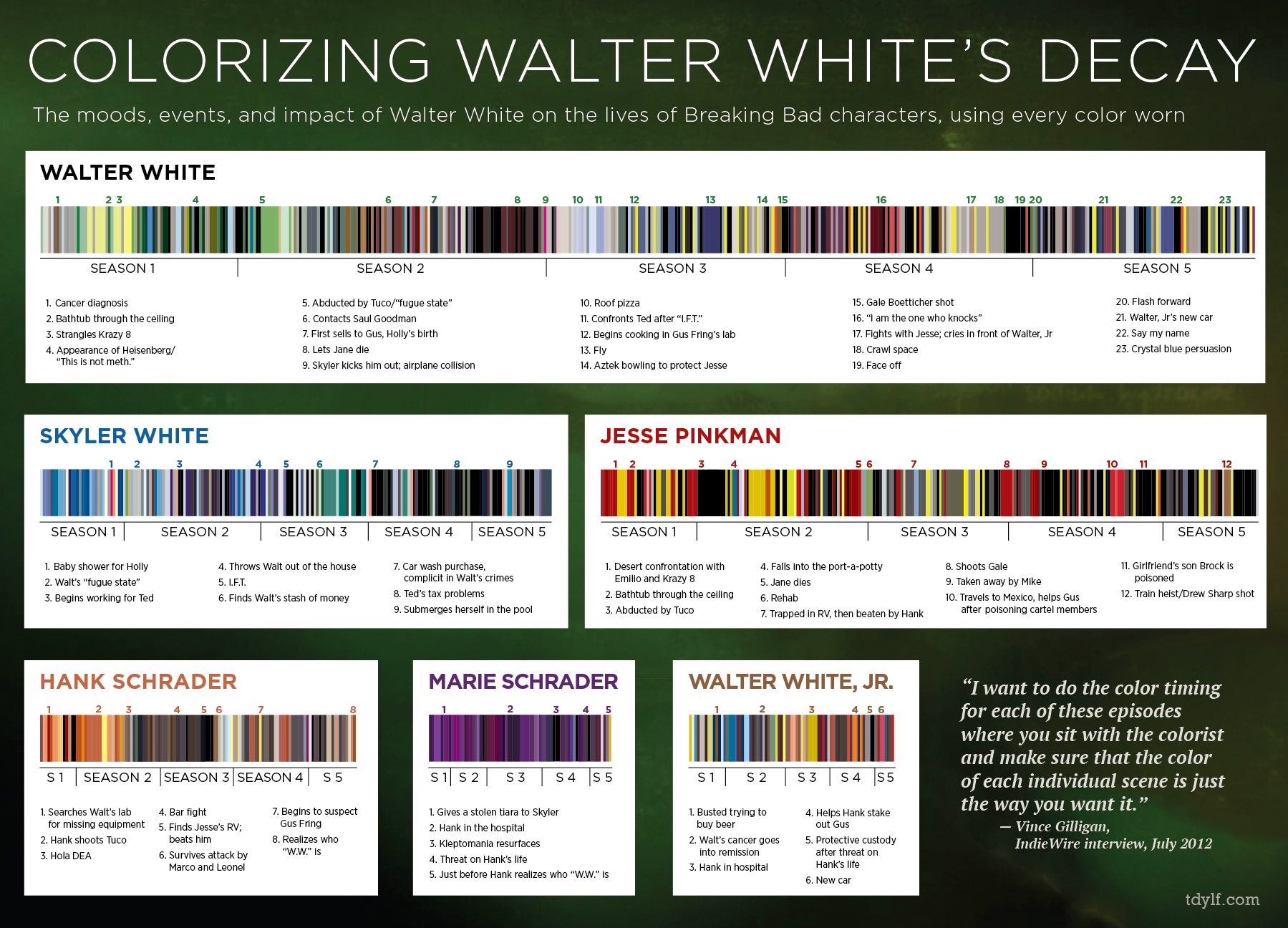 The inevitable end of everybody’s favorite meth drama is fast approaching. In celebration of the September 29 finale, let us all take a moment to enjoy one of the most underrated aspects of this phenomenal show: the costumes. Breaking Bad has always excelled in its use of symbolism and continuity. And nowhere is this more apparent than in the wardrobes. WARNING: MAJOR SPOILERS AHEAD.

Walter White tops my list as the most interesting and complex character to ever grace television. His costume breakdown wins “most fascinating” because his color phases are cleanly cut. There are dramatic shifts from light to dark correlating with the character’s actions. Overall, his palette becomes darker and harsher as he gets deeper into the meth business. When he despairs (over Jane’s death, for example) or suffers from a guilty conscience (from missing Holly’s birth), he often wears dark blue or black. Skylar is similar; as she becomes more involved in Walter’s business, her bright blues fade into dark grays and blacks.

As for supporting characters, Hank wears a lot of orange when he is at the top of his game. As expected, his wardrobe fades to black as Walt usurps his power. His burnt orange clothing returns at the end of Season 5, Part 1, when he finally discovers Walter White’s identity. Though the shade varies some, darkening during Hank’s injury and her stealing spree, Marie wears one color and one color only: purple. She looks amazing in purple but her character also remains as constant as her purple wardrobe. She is steadfast in her support for Hank and in her ideas about Walter and Skylar. Marie does not show immense amounts of growth and is a creature of habit, which definitely shows in her outfit choices.

Of course, as you can see in the infographic, there are times when Walter and Jesse are required to wear yellow suits to cook, which messes with the color scheme. Also, since Hank discovered Walter’s identity, the characters have shifted. In the episodes that have just aired Hank wears a lot of black and red, Marie holds off on the purple, and Skylar and Walt actually wear bright colors and white. The shift in power away from Walter White has given the Schraders’ the upper hand, which may show why they are the ones sporting colors most commonly viewed as dominant.

Breaking Bad is only a few episodes short of the series finale, but when you go back and re-watch the show (which of course you are going to want to do) you can see how costumes and their color schemes add to the show’s brilliance.

The Art of Optical Illusion: When Two Paintings Merge into One »