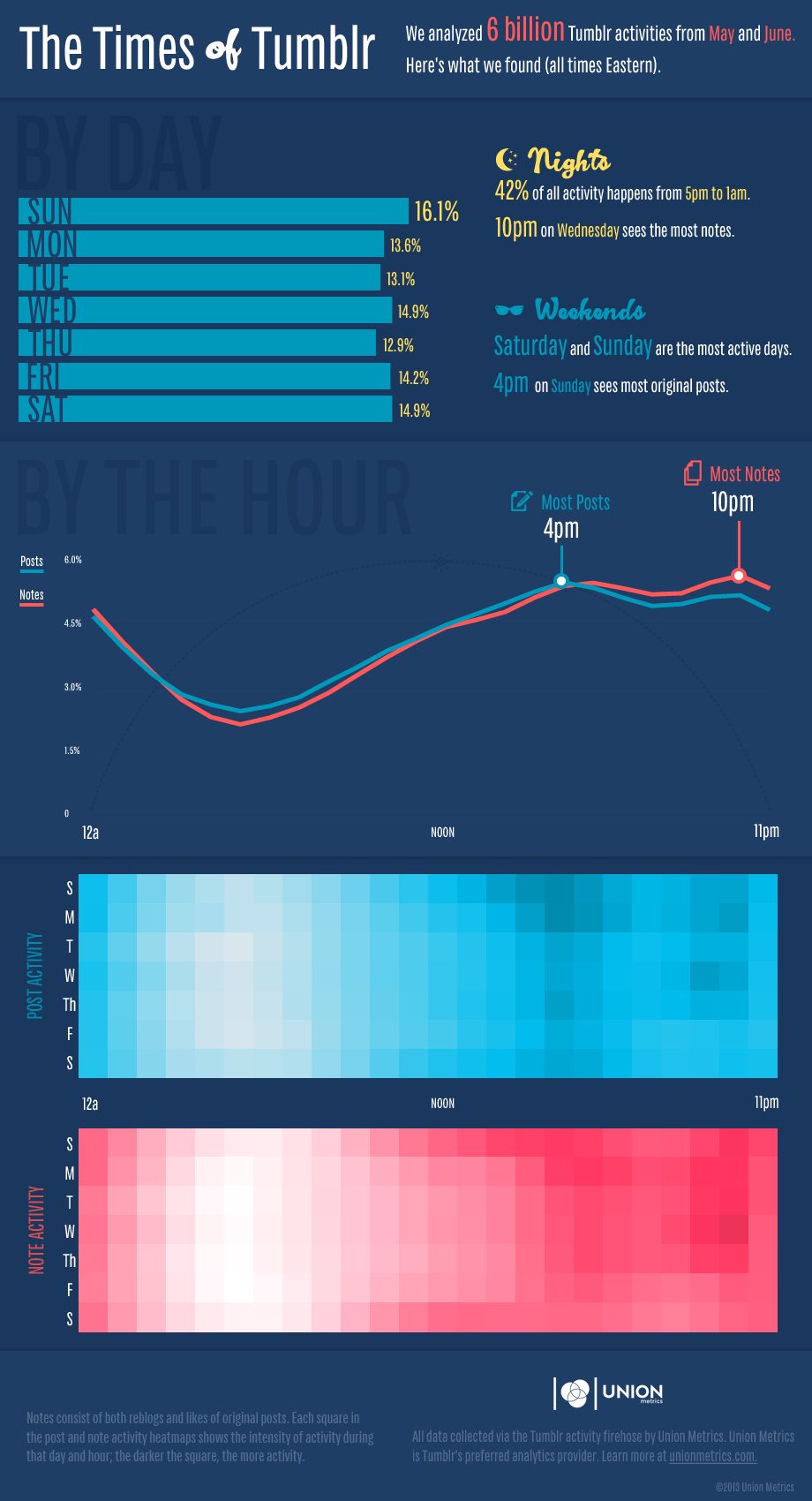 When Is the Best Time to Post to Tumblr?

Tumblr has always been a bit of a mystery to bloggers. Though we can see from our tumblrs how many notes (e.g. likes and reblogs) each of our posts receives, it can be difficult to find this information in a chart or other composite form. Services like Union Metrics, the preferred analytics platform of Tumblr, have started to fill this void, but they ain’t free. That is, until this week.

To celebrate its first ever free option for Tumblr users, Union Metrics has released some helpful information.

During May and June, Union Metrics analyzed more than 6 billion Tumblr activities, including posts and notes, to determine when the blogging platform is most active. Through heatmaps, Union Metrics shows the intensity of activity during every hour of the week, where each square represents a different hour. The darker the square, the more active Tumblr was at that time.

When you browse the charts, you’ll find that Tumblr is most active with both posts and notes on Sunday. In fact, 4 p.m. EDT on Sundays sees the most original posts. The level of activity on Saturdays and Wednesdays is also notable, with notes activity peaking at 10 p.m EDT on Wednesdays. In general, Tumblr is busiest in the evenings and at night, with 42% of all activity occurring between 5 p.m. and 1 a.m. EDT.

Using this information can help you determine the best time to post to Tumblr; for example, if you hope to receive many notes on your posts, it might be smartest to post at a time when Tumblr typically sees a lot of note activity. You can use Tumblr’s scheduler to delay your posts until Saturdays, Sundays, or evenings in general. Or you could try another strategy and post to Tumblr when the site is least saturated with posts, in the early mornings. Of course, when determining the best times to post to your own blog, nothing would be more helpful than data on your own personal tumblr. But while you wait for Union Metrics to let you into its analytics platform, check out the service’s findings on activity across the whole site (below).

Tumblr was acquired by Yahoo in June, sparking fears that Yahoo CEO Marissa Mayer would turn the niche blogging site into a money-making wasteland cluttered with ads. To date, it seems that Mayer hasn’t ruined Tumblr – but who knows what’s to come?

Bubblews - The Written Word
more numbers to consider... to bad I thought math was unimportant in school.
Reply 8 years ago Liz Pullen
What time zone are you talking about? ET? GMT? Was this data standardized for the local time at posting/sharing/liking?
Reply 8 years ago

What If New York Moved to the Grand Canyon? [PHOTOS] »