ALERT: Will Your Blog Get Burned When Google Shuts Down Feedburner?

By now you’ve heard of the imminent demise of Google Reader. But how long do you have until Google shuts down Feedburner? How devastating would that be to your blog? Here we offer answers and evaluate alternatives to Feedburner.

Rumors have floated around forever that Feedburner will get axed at some point! Google has already shutdown the AdSense for Feeds, a product that allowed publishers to monetize their RSS feeds. And Google scrapped Chrome’s RSS extension, which allowed browsers to easily detect and handle RSS feeds. (This was really useful for subscribing to blogs that didn’t have a RSS icon readily visible. You can find a good alternative in RSS Subscription Extension).

Feedburner is now the last RSS-focused product Google has left and it produces virtually no revenue. While most every other Google service received a visual update to streamline its look, Feedburner didn’t. In fact, it’s been a very long time since Feedburner got any updates, a sign of total neglect by Google. Feedburner’s statistics are periodically unavailable and, when they are available, hardly reliable. The Feedburner API has been depreciated and can no longer be used to extract subscriber data. And the Feedburner blog (renamed Adsense for Feeds after the closed product) hasn’t been updated since July of 2012 (just to say goodbye to Adsense for Feeds). So all signs point to this conclusion: Feedburner is doomed. How many more spring cleanings can Feedburner actually survive?

With Google’s track record of closing down popular products, how ironic was it that, in the same week Google killed Reader, the company introduced Google Keep, a new note-taking service? Do they really expect us to start trusting this new product with our thoughts and important task lists after screwing with our content discovery and blog subscriptions via Reader?

Fool me once, shame on you. Fool me twice, shame on me. Google may think it can waltz into a market that Evernote and others have staked out, but I’m not going to dance.

It might actually be good, or even better than Evernote. But I still won’t use Keep. You know why? Google Reader.

I spent about seven years of my online life on that service. I sent feedback, used it to annotate information and they killed it like a butcher slaughters a chicken. No conversation — dead. The service that drives more traffic than Google+ was sacrificed because it didn’t meet some vague corporate goals; users — many of them life long — be damned.

Looking from that perspective, it is hard to trust Google to keep an app alive. What if I spend months using the app, and then Google decides it doesn’t meet some arbitrary objective? Evernote has my data and frankly, I’m glad to pay them to keep it because they are who they are.

Comic via The Joy of Tech

So what happens if Google decides it wants to kill Feedburner, too? How might losing it affect your blog?

To start answering those questions, let’s first clear up the difference between Feedburner and Reader.

RSS – Rich Site Summary (often dubbed Really Simple Syndication) is a family of feed formats used to publish frequently updated works like news articles and your blog entries. These RSS feeds benefit publishers by letting them syndicate content automatically in a standardized XML file format that allows the information to be published once yet viewed by many other different programs.

So every blog should have a natural raw RSS feed, dashburst.com/feed, for example.

Now we take this RSS feed and “burn” it to Feedburner here: feeds.feedburner.com/DashBurst

Why do we care to do this?

Well there a few reasons a Feedburner feed is more advantageous than your own raw RSS:

1. Feedburner gives readers the option to subscribe to your feed through multiple web-based news readers like Google Reader (soon to be closed), Yahoo, AOL, Netvibes, newsgator, Pageflakes, FeedDemon and others.

2. As a second, powerful option, Feedburner can deliver your RSS to readers via email.

3. Lastly, Feedburner offers a dashboard with statistics on your blog like the total number of subscribers and the type of aggregators they are using to read the feed.

So when Google Reader shuts down we could potentially lose all 79 of those subscribers. But Google has provided a Takeout option for people to export their subscriptions and folder organization to other RSS readers, like Feedly – which has seen more than 500,000 users flock to its site in the last several days. So, in the final assessment, the closing of Google Reader may be unwelcome news to many, but anyone who actively uses the service has ample time to save subscriptions. This means that, after Reader shuts down, your blog should continue to reach those who actively consume your feed. That’s not so bad, right?

But what happens if Google shuts down Feedburner too? What would be the repercussions? Feedburner is the only RSS product Google has, and, as we discussed above, it seems like the ax is inevitable. The repercussions would be much more devastating than those caused by the closure of Google Reader…

See, if Google Feedburner shut down today, our blog would lose 100% of our 126 subscribers. It doesn’t matter what service a subscriber uses—Reader, Netvibes, Feedly, etc—the closure of Feedburner will invalidate the feed they subscribe to (in our case, feeds.feedburner.com/DashBurst). Our raw feed on our blog would still work fine, but, since we chose to direct our blog syndication to Feedburner, those subscribers would all be lost.

Now would Google really shutdown Feedburner? It’s hard to say but all signs point to yes. My one comfort is this: all of Google’s own blogs use Feedburner for syndication.

A look at the statistics for Google’s own blogs provided within Google Reader shows:

The official Google blog has 353,991 subscribers via Google Reader. Google also has a dozen other blogs with thousands more subscribers, and this is just the data provided by Google Reader—the number of Feedburner subscribers are probably double that.

Some other popular feeds include CNN and Engadget:

So would Google risk losing a million of its own subscribers by killing Feedburner? You wouldn’t think so, not without providing some redirect of the feeds or, if possible, ‘subscription takeout,’ but we may need to look deeper into Google’s motivation for killing Reader in the first place. It appears Google, while reorganizing staff around core services, is making a push to force users to use Google+ for discovery. The search giant could have plans to one day integrate some form of RSS product directly into Google+, which would be a real positive and show life for RSS syndication. But given the direction Google has taken, this doesn’t seem likely.

What can you do?

Take control back of your feed!

Feedburner Tip: There is a little know feature called MyBrand that lets you use your own domain name to host your feed. This gives you more control over your feed and its identity. You can find and activate the setting from the menu option My Account > Services > MyBrand. You’ll need to add a new sub domain to your site that points back to Feedburner, and then update the URL you send your readers to subscribe.

Having done this, now our feed location is on our own domain at feeds.dashburst.com/dashburst/, instead of feeds.feedburner.com/DashBurst. I suggest you do this, too. That way, if and when Google shuts down Feedburner, you can set up a new service that spits out your feed to the same sub domain as before (the domain that users were subscribed to). So if you’re still using Feedburner and planning to continue doing so, to minimize your risk, you need to take this step! All your previous subscribers will get the same feed as before, you’ll just give yourself a much better chance of retaining your new subscribers when the other shoe drops on Feedburner.

And, hold on—there’s an even better option:  you can preemptively ditch Google and implement another alternative like Feeblitz, RapidFeeds, Feedity or Feedcat.

So what is the best alternative to Feedburner?

The optimal replacement would provide an easy landing page for readers to subscribe to your feed with multiple readers/devices. It would also offer an email option for users to subscribe and collect helpful information and statistics to analyze your feed. If you miss Adsense for Feeds, having some options to again monetize your feed would also be nice.

But most importantly the optimal RSS solution would allow you to retake control of your feed!

IT DOESN’T MATTER WHICH SERVICE YOU USE TO PROMOTE YOUR RSS CONTENT, IF THE FEED URL ISN’T ON YOUR DOMAIN, YOU ARE AT RISK!!!!!!

The best alternative to Feedburner at this time is Feedblitz, which has a step-by-step guide for migrating from Feedburner to take control of your RSS, email and social media marketing campaigns. Feedblitz is a very powerful and attractive alternative that provides feed monetization, rich analytics, FeedBurner migration and compatibility, AutoCast for podcasts, custom URLs for branded feeds and per-post customization and branding. Now you can use Feedblitz for as many RSS subscribers as you like for just $1.49 per month. This isn’t free like Feedburner, but Feedblitz is as cheap as it gets and, considering the drawbacks of existing free RSS services, worth the negligible fee. Feedblitz does have some more expensive pricing options for RSS-to-email newsletters, though, so you could consider using a combination of Feedblitz for RSS, and another service for email like Mailchimp. (That’s how we roll currently)

We’ve done it and we’re not alone as many others have or will be traveling down this path soon, like Brain Clark (from CopyBlogger) who said:

We’re now with FeedBlitz. Our feed is too important to trust to a free, unsupported service from Google.

Google has a responsibility to the tech community, given its “Do No Evil” mantra, to take a public stand on the future of Feedburner and its support or lack thereof for RSS.

Are you currently using Feedburner on your site? You better take a look and consider your options before you go from burning feeds to getting burned on your blog… 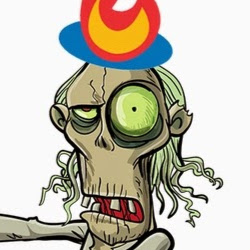 Stephan Williams
Hi Daniel, Thanks for this nice post. It's more relevant than ever - more and more bloggers are wondering when Feedburner will shut down (I think it will be during the next spring cleaning), if they should switch now, and especially: switch to what? To help people decide on the switch, I recently launched a website that compares the most important All-in-One "Feedbuner Alternatives" solutions in a chart. Please have a look at http://www.feedburner-alternatives.com The site will be updated as more alternative services appear in the market, so if you hear about anything (you seem to be on top of the news) please let me know! Cheers, Steve
Reply 6 years ago « The evolution of smart watches