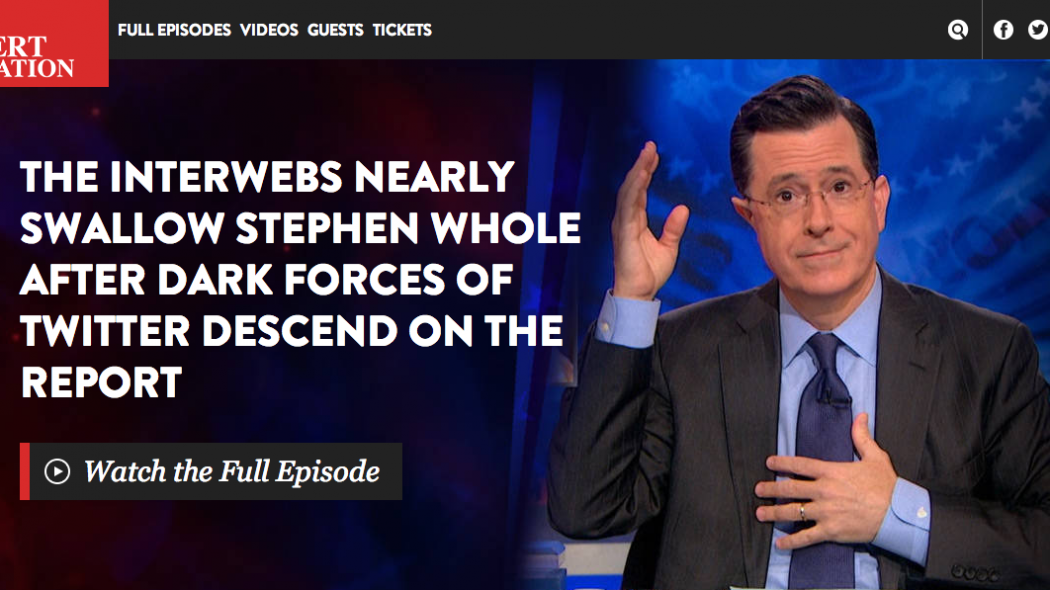 Stephen Colbert is not the most politically correct when it comes to his spoof and satirical reporting on The Colbert Report. But after a comment he made on the show was tweeted out of context and people petitioned to have the show canceled, Colbert addressed the situation in his typical lighthearted but spot on manner as soon as he arrived back on air.

Last week on The Colbert Report Colbert gave Dan Snyder, owner of the Washington Redskins, a hard time for rebelliously creating the Original Americans Foundation in response to people demanding the team change its mascot. Afterward the @ColbertReport Twitter account tweeted a message that read, “Ching-Dong Ding-Dong Foundation for Sensitivity to Orientals or Whatever” without the rest of the joke’s context.

Despite the fact that the tweet was later taken down and the @ColbertReport account deleted, 23-year-old writer and activist Suey Park, also known as “Angry Asian Woman,” started campaigning to take the Colbert Report off the air using the hashtag #CancelColbert. Colbert took matters into his own hands by responding to the original offensive tweet from his personal Twitter account:

#CancelColbert – I agree! Just saw @ColbertReport tweet. I share your rage. Who is that, though? I'm @StephenAtHome http://t.co/e0Pqz7U7i9

Then, once his show started up again on Monday, Colbert aired a parody video about the show being cancelled followed by a 10-minute segment about the incident. Colbert explained the original on-air comment, demonstrating that he is not, in fact, a racist:

In his response, Colbert critiqued the 140-character limit of tweets and pointed out the potential misinterpretations that can arise from such little room for expression. “Who would have thought a means of communication limited to 140 characters would ever create misunderstandings?” he asked with a pinch of sarcasm. Colbert also took a stab at the way people use the internet, pointing out that merely removing a comment cannot remedy any negative situation.

Finally, Colbert made fun of the broken state of sensational journalism fueled by the internet. Once #CancelColbert started trending, “it was picked up by a small group of Americans who get their information only from Twitter: the news media,” Colbert said. He then summarized the series of events from the media’s point of view:

To recap, a web editor I’ve never met posts a tweet in my name on an account I don’t control, outrages a hasthag activist and the news media gets 72 hours of content. The system worked

The whole ordeal caused some disruption, but Colbert responded in a clever and thorough way, even managing to twist the situation into publicity for the show.

Image by Comedy Central
via NPR

« Mark Zuckerberg Slashes His Salary to $1